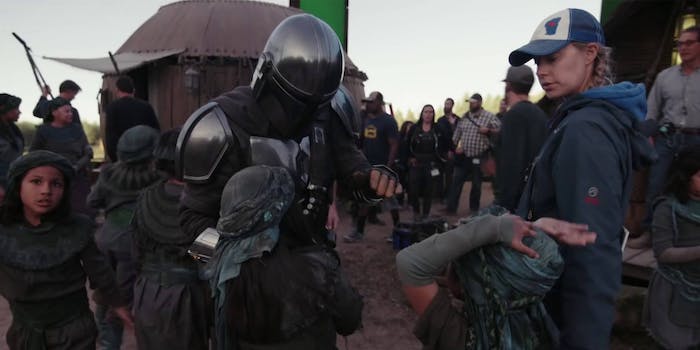 How to stream ‘Disney Gallery: Star Wars: The Mandalorian’

Behind the scenes of a galaxy far, far away.

Hit space western The Mandalorian is so good it got even casual Star Wars fans to become Disney+ streamers. In a post-Baby Yoda world, a new eight-episode retrospective is giving fans a behind-the-scenes look at the celebrated series.

Hosted by creator and executive producer Jon Favreau, each episode promises insight and commentary from the show’s actors and directors that helped make The Mandalorian the pop culture phenomenon that it is. Plus, there’s bound to be at least a few shots of Baby Yoda, if you’re aching for a fix.

Here’s everything you need to know to stream Disney Gallery: Star Wars: The Mandalorian.

When does Disney Gallery: Star Wars: The Mandalorian air?

The first episode airs on Star Wars Day, May 4 on Disney+.

How to stream Disney Gallery: Star Wars: The Mandalorian

Disney+ is available as either a standalone service or as part of a bundle with Hulu and ESPN+. To watch the new The Mandalorian behind the scenes series, pick the package that’s right for you.

Disney+ offers the best in Disney, Marvel, Star Wars, and National Geographic has to offer, including classic films from Snow White and the Seven Dwarves all the way through Onward. There’s also exclusive can’t-miss series like The Mandalorian and every Simpsons episode ever.

Hulu is one of the biggest and best streaming services available, which give you access to the best in new television shows including Black-ish, Bob’s Burgers, and Modern Family and classic programs including The Golden Girls alike. It’s a great way to watch last night’s new episodes for free, including every show in the FX channel library like It’s Always Sunny in Philadelphia and Sons of Anarchy. Plus, it’s the only place to get every episode of Seinfeld.

Apart, these streaming services are fantastic, but together they’re the best deal going in online streaming, at only $12.99 a month.