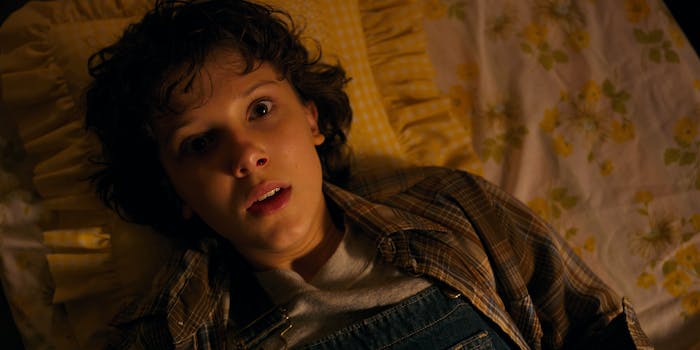 Netflix is turning 'Stranger Things' theories into a cottage industry.

The fan theories coming out of Stranger Things season 2 aren’t as meaty as they were for season 1, but the show about the fictional town of Hawkins, Indiana—and the dark forces at work beneath it—has engagement down. Fans stuck around for a year and a half to devour season 2, and see if some of their theories were right.

Stranger Things has now reached a level of fandom that warrants an after show like The Walking Dead (and there’s even a nod to the series in this season via Steve’s nail bat). Beyond Stranger Things is Netflix’s version of Reddit where the show’s stars, director/producer Shawn Levy, and creators Ross and Matt Duffer recap each episode, but also dissect theories and clues. It might seem like overkill, but it’s a smart move in terms of engagement.

Here are a few lingering questions about season 2 and beyond. Check out our discussion of season 2 on this week’s Upstream podcast.

Will Billy be season 3’s villain or good guy?

Billy (Dacre Montgomery) is the season’s new bully with an unnatural hatred for Lucas. And while he’s pretty awful (and apparently modeled after Rob Lowe in St. Elmo’s Fire), Montgomery said in a recent interview that his role in the next season might be even more ominous: “There’s also a far more sinister side to where everything is going through Billy in the future that we’ve only had very small discussions about, aside from his dad and maybe what it has truly turned him into.”

Or maybe he’ll end up as season 3’s new fave, like Steve Harrington (Joe Keery) did in season 2.

A theory has also been floated that he and step-sister Max (Sadie Sink) are Russian spies, though some critics posit that it would be too obvious. Maybe they have a tie to Hawkins Lab as well?

What is the Mind Flayer? And will it return?

We know that the Upside Down mirrors Hawkins, but what exactly is the Mind Flayer, the creature that begins to torment Will Byers (Noah Schnapp) in visions, and then possess him physically? Season 1 theories predicted that the Flayer, a D&D character that thrives in darkness, could be a season 2 monster, and it fits in with the show’s theme of psionic abilities. We see a showdown between Eleven and the Flayer at the end, but the final shot of episode 9 turns the idea of closure on its head. This opens up the idea that the Flayer will possess someone else in Hawkins in season 3, but it’s not clear if it will be poor Will Byers again, since the Flayer was able to contact him in the real world and seemed to have been priming him for something.

Matt Duffer explained on the after show that the monster’s motive are unclear for now, but it is thinking: “It’s something from another dimension where you don’t understand what its intentions are. It’s beyond comprehension. We love the idea of a hive mind thing, that it connected everything.”

Bill Nye has some theories about the show’s ‘multiverse’

It’s still not clear where exactly the Upside Down came from, but Bill Nye went deeper on the idea of a multiverse on the after show: “…the Upside Down is out there, it turns out perhaps there are these bubbles of universe which we now are calling multiverses, also expanding somehow at the same time. And is it possible that there are areas like this where the multiverse intersects? …The void, yes.”

Could that multiverse extend beyond Hawkins in season 3?

In episode 7, Eleven (Millie Bobby Brown) travels to Chicago to find her Hawkins Lab sister Kali (aka Eight), who also has powers, and gets a punk rock makeover. Many fans said the episode felt out of sync, or was too much of a winking ’80s reference in a show full of them.

Criminal Punk Makeover Eleven looks like a member of Tears for Fears & I love it. #StrangerThings pic.twitter.com/LyVw2RQU3T

Eleven finds out in episode 7 that Dr. Brenner (Matthew Modine) is still alive, which was unclear after season 1. Executive producer Shawn Levy confirmed he’s still alive, and that the show might move out of Hawkins in future seasons. Maybe… Russia?

Does the ‘It’ connection go deeper?

Bob (Sean Astin) describes a clown that terrorized him when he was a kid in Maine, named Mr. Baldo. The kids go on an extended spelunking tour of the Upside Down to find Hopper, and it looks a lot like the sewers of Derry from the film version of It. And of course there’s the Finn Wolfhard connection: He says the same line in both It and season 2.

Finn Wolfhard says the same line in both #StrangerThings and the movie IT pic.twitter.com/70RvYf1AwG

The Duffer Brothers copped to It as a major influence. Said Ross: “It’s probably It for both of us. It’s the big one, and It is obviously a huge inspiration for the show. That’s probably the biggest, I think just because we’re the age of those characters when we’re reading it, so it’s not that his other books aren’t amazing, they were.” Bob meets his fate in a different way, but perhaps Mr. Baldo will make another appearance.

Also, the final shot of the Hawkins Middle School gym as it spins and reveals the Upside Down shows different cars. As Elite Daily points out, they could be from the ’50s, hinting that the evil has been around for a while.

Bob’s parents are from Maine, and he was haunted by an evil clown when he was a kid which would’ve been in the late 50’s #StrangerThings pic.twitter.com/G1SfJiCHRd

Dustin is actually… Wait. No, it’s too terrible.

I HAVE MADE A TERRIBLE DISCOVERY pic.twitter.com/Qx1UPvOaci