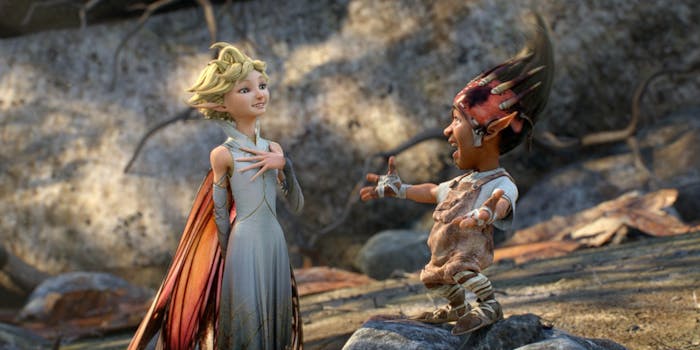 Learn about George Lucas's upcoming animated film from the cast.

Elves, goblins, magic potions, and the meaning of true love are at the center of George Lucas’s latest film, Strange Magic. An animated musical inspired by William Shakespeare’s A Midsummer Night’s Dream, the movie has an impressive cast of voice actors bringing its characters to life.

Lucas told press at an event Friday that he knew he wanted actor Elijah Kelley to play the role of the elf Sunny. Kelley previously worked with Lucas on the World War II–era film Red Tails.

“I feel very, very honored that he [Lucas] wanted me to bring something of his passion of over 15 years to life. That’s a big mantle to carry when somebody like G.L. calls on you,” Kelley told the Daily Dot.

Kelley said even if the role had been horrible he wouldn’t have passed on the opportunity to play the part, but luckily that’s not the case.

“It’s actually an incredible piece of material and Sunny is an incredible person, an incredible character in that animated world,” he explained. “He’s a fighter, he’s courageous, he’s resilient, he’s very smart, very charming, very witty. He’s very like me!”

The film includes a wide range of music from the last six decades, all with a twist to make the songs fit into the fantasy world. The cast recorded more than 400 songs for consideration.

“[Lucas] had some favorite songs that had been redone and recut and every time he just feels like he gets better and better and better and better. A lot of people don’t have that mentality, a lot of people just want to stick to the old script but we can’t progress like that, so the fact that we were able to do mashups and new versions of these particular songs and different renditions—speed them up, slow them down, we got a little bit of Beyoncé in there. It’s beautiful how those things mesh together,” he said.

All of the lyrics help tell the story of two very different worlds coming together as they learn a little something about real love. While there are a few different messages kids and adults can take away from the film, Kelley hopes those who see it learn about fighting for what you want.

The music and meanings in the film were also discussed by other members of the cast during a press conference late last week. For actor Sam Palladio, who voices Roland and can currently be seen on ABC’s Nashville, the music is something in particular he hopes both young and old take away from the film.

“You go back to Frankie Valli that Roland sings and Elvis songs and it really is this fantastic journey through the decades of music. You know, I hadn’t heard much Electric Light Orchestra before this, so we’re discovering these new genres and old bands,” he said. “There’s so much great stuff out there that this movie does really link together and I hope will encourage young and old to either go back into their LPs or to get on iTunes and download an Elvis’ greatest hits or something.”

One of the voices audience members will hear the most in the film is that of Evan Rachel Wood, who plays the tough fairy princess Marianne. She was drawn to the character by the many way she felt she could relate.

“She was a tomboy, sword fighting, kind of a rocker. She was a fairy with an edge. She was the anti-fairy princess, but at the core sweet, and just like everyone else wants to find love, wants to be seen, wants to be known, wants someone to love her for who she is and not try to make her into something that she’s not,” Wood said.

“One of the main messages is if you’ve ever felt like a black sheep or different or weird or unloveable is to not be afraid of those things about yourself… the things that make you different and unique are the things that make you the most beautiful and special,” she said. “You don’t have to be afraid of it. And not judging a book by its cover and really getting to know somebody and loving them for who they are. Finding love in unexpected places. They’re all really good messages.”