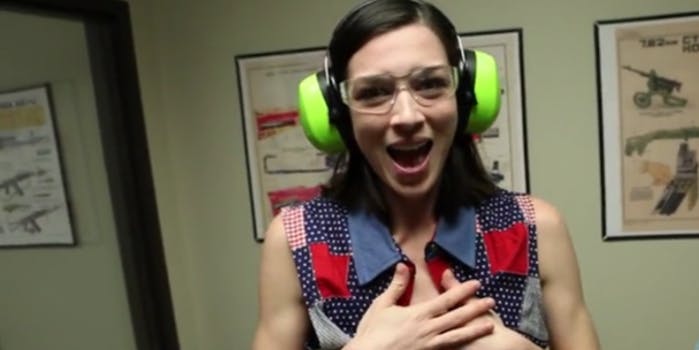 Stoya takes a bullet for the Internet in her new webseries

The premise is simple: “In each episode there’s a Stoya, and I go and do a thing.”

When I get on the phone with Stoya, she sounds distressed. She’s talking about Internet censorship in Turkey, and the men who’ve been tweeting… about her ankles.

“Every Turkish man with an Internet account wants to tell me I have fat ankles,” she explains. “I don’t know if there’s a cultural fixation on ankle size there. … So I’m finding a way to have my heart grow three sizes today.”

Stoya is an adult film star, but she’s also a writer, an aerial performer, and a human being. I called to ask about her new webseries for adult site WoodRocket (site NSFW) called Stoya Does Everything, which debuted in mid-February.

The premise is simple, Stoya explains. “In each episode there’s a Stoya, and I go and do a thing.”

In the first episode, Stoya goes to a gun range. She’s wearing stilettos. “Guns make me very nervous,” she announces in the intro sequence. In under five minutes, a buckshot blows a shell into her blouse. It’s painful.

“How dumb was it going to a shooting range wearing a blouse?” she laughs. “So after the shooting range epsiode, we had a discussion with Lee Roy about how we didn’t want the show to be ‘Stoya Hurts Herself.’”

The second episode follows Stoya, dressed like Velma from Scooby-Doo, as she hunts ghosts in an allegedly haunted park in suburban Las Vegas. As in the gun range episode, she does not hide her discomfort.

“Adult films can be funny and funny can talk about or reference aspects of adult films,” Stoya says, “but ‘synonymous’ is far too intense of a word to use. Both mediums do tend to make use of a similar shorthand of idioms and caricatures to move plot along quickly and leave time for jokes or sex scenes, but they are completely different disciplines.”

She also has a good sense of humor when dealing with trolls, which has become an occupational hazard. She’s insanely popular on the Internet—she’s got close to 60,000 followers on Instagram and more than 160,000 on Twitter. 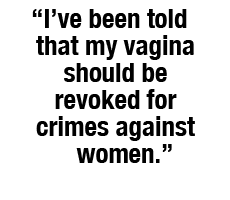 “The things I write about, people think I can’t properly evaluate my experience because I’m a pornographer.”

“Having a job that involves talking to the press means inevitably everything from my politics to my chewing-gum habits are up for debate and discussion. I’ve been told that I must be a feminist, that my job is feminist, that I absolutely cannot be a feminist, and, one time, that my vagina should be revoked for crimes against women.”

She references the 2011 book A Billion Wicked Thoughts, by neuroscientists Ogi Ogas and Sai Gaddam. It touches on the cognitive dissonance between what people search for online and what they might tell a researcher they like, based on a year’s worth of search terms.

“The Internet, in regard to sexuality, has allowed us to research niche content, things that 10 years ago people thought was weird,” she says. “We spend so little time discussing sexuality, and have so many hangups. [You ask someone], ‘What do you look at?’ ‘Oh, I look at X-Art and sometimes I look at people shoving things in their butts.’ But when you look at their search history, it’s different.”

Thinking back to Turkish men’s potential obsession with women’s ankles, I ask if she’s ever felt threatened by online harassment.

An upcoming episode of the series will feature Stoya dressing up as professional wrestlers; she recently became obsessed with WWE Raw and SmackDown. If WoodRocket is attempting to bridge a gap, Stoya is the perfect muscle for it.