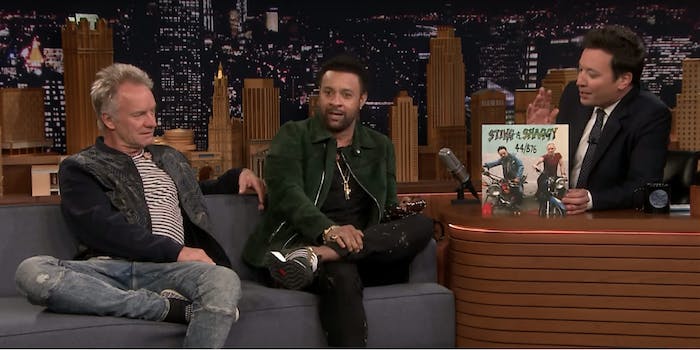 That time Shaggy wandered onstage when Sting was doing ‘Roxanne’

Sting thought he was Sean Paul.

Sting and Shaggy have a new album out, 44/876, and on Monday night they appeared on The Tonight Show to explain why we now have to acknowledge its existence.

Sting explained their meetcute: He was performing and Shaggy wandered onstage during “Roxanne.”

“I thought it was Sean Paul,” Sting quipped.

After that chance meeting the two singers discovered that their voices were complimentary, and that led to first single “Don’t Make Me Wait.”

As the lead single, “Don’t Make Me Wait” leans on Shaggy’s lilting voice, filled in with Sting’s harmonies and a bouncing reggae rhythm. Similarly, “Morning Is Coming” sounds like classic reggae and the title track dips into dancehall; “Crooked Tree” reimagines Prince Buster’s “Judge Dread” but on a more somber note.

Shaggy and Sting (Shting?) also explore more traditional rock and roll on “Dreaming in the USA” and Sting calls someone a “Sad Trombone,” though it’s not clear if it’s an insult (or a tantric sex thing). There are references to politics and immigration on the album, but it mostly stays sunny, if a bit one-note.