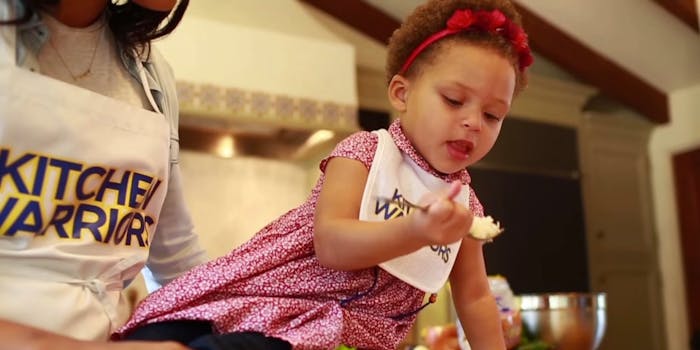 Fresh off his Golden State Warriors’ NBA championship win last month, Curry is thrilled that everything worked out like it was supposed to, thanking the medical staff who made it happen in an Instagram photo featuring Ayesha, their 2-year-old daughter Riley, and baby Ryan. They’re all at ease with Riley upping the cute factor by helping her mom hold her little sister.

I'm wayyyyy up I feel Blessed! God is Great. Thanks to the doctors and staff at Alta Bates for taking care of my girls, especially Dr. Poddatori. Healthy baby and @ayeshacurry is all I prayed for. #prouddaddy

Ayesha Curry took to her blog after her daughter’s birth to give her readers an update and called the whole thing “a miracle.”

Stephen, Riley and I are enjoying this gorgeous gift from God and basking in the present! We are now officially a family of 4! Riley is completely enamored with her little sister and has taken on her role as big sister beautifully. I am already so proud of her!

Riley, always one to brighten up an otherwise dull NBA press room, finally has a partner-in-crime. Give it a couple years and these two could possibly give the NBA a run for its money whenever Curry talks to the press—or rather, lets him stand by while they’re having their own show.