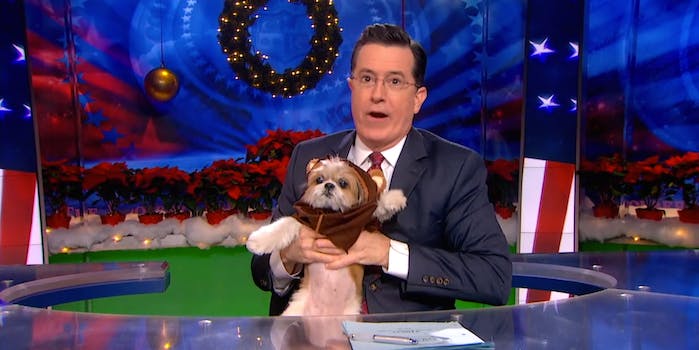 He's had a lot of stuff down there over nine years.

With only a couple more weeks of The Colbert Report left, Stephen Colbert may still have a few tricks up his sleeve (and under his desk).

We never see what’s on the other side of his iconic desk, but over the course of the past nine years, he’s pulled plenty of things out from under it to the amusement of his audience. And we can relive it all thanks to a supercut from Comedy Central.

Based on what he’s pulled out from under there, his underground desk space must be expansive. He’s easily got a petting zoo, multiple rooms to hold Michael J. Fox and a washing machine, his TV-ready family, and a bunch of comedians, at least one fridge for food and booze, and a place to hang his Lord of the Rings swords and house his Emmys. It sounds like one giant party, and perhaps that’s where Colbert’s character can reside once the show ends.

We can only imagine what else he’ll reveal down there before his show ends.