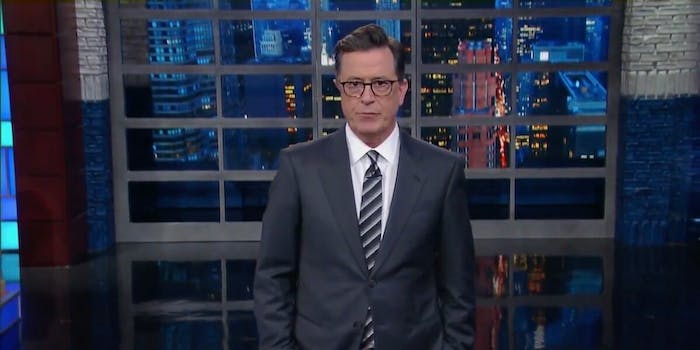 Stephen Colbert thinks Trump could be out of office by Friday

'First of all, sir, the opposite of alt-right isn’t the alt-left, it’s the not-Nazis.'

Stephen Colbert took  Donald Trump to task for his bizarre press conference on Tuesday where the president said there is “blame on both sides” for the violence that took place in Charlottesville, Virginia, this past weekend.

During the press conference, Trump appeared to backtrack his condemnation of the KKK, neo-Nazis, and white supremacists for inciting violence—which he made two days after his initial and much-criticized “many sides” comment. He questioned whether people would want to take down monuments of George Washington and Thomas Jefferson next after going after Confederate statues, asked members of the press “What about the alt-left?” and said there were “very fine people” among both groups.

Colbert mocked Trump’s comments one line at a time, sarcastically pointing out that some of the marchers were anti-Semitic. But his sharpest line came after Trump’s “both sides” comment, which Trump had no doubt of.

“The only thing I’m doubting right now is whether you’re still going to be president by Friday,” Colbert said. “Because, what the hell are you talking about?”