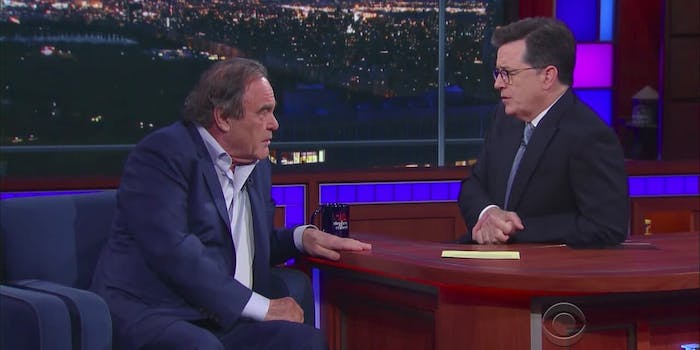 It got very serious in the studio.

Stephen Colbert’s interview with director Oliver Stone got heated after Stone—who interviewed Vladimir Putin multiple times over the past two years for The Putin Interviews—said he took Putin at his word and refused to say a single negative thing about him.

Colbert had yet to see the all of The Putin Interviews, but the minute or so he saw concerned him. Despite late-night’s general impression of lighter interviews, Colbert went on the offensive and asked why Stone didn’t follow up Putin’s denial of interfering with the 2016 U.S. election or question him.

“Let’s talk about Vladimir Putin, OK,” Colbert said. “You spent 20 hours with this guy, and you’ve gotten a little heat. People have said you’re being too cozy with him, that you believe him too easily. What do you say to the people who say that this is a fawning interview of a brutal dictator?”

It was one of Colbert’s more tense interviews in recent months as he and Stone went back and forth on Putin. Colbert attempted multiple times to get Stone to criticize or say anything about Putin, and not only did Stone not give in, he appeared to have nothing but compliments for Putin.

At one point, the audience turned on Stone and booed him after Stone said that Putin had been “insulted and abused.”

Stone didn’t seem to understand why there’s an anti-Russian sentiment and pins it on Colbert’s hatred of Donald Trump, which Colbert instead characterizes as distrust. For Oliver, because of Colbert’s anti-Trump spin, it’s easy for him to blame Russia for “hacking the election.”

There’s more to it than that, Colbert argued.

“I don’t understand why our president will never say anything negative about Vladimir Putin given that Putin is an oppressive leader of his country who suppresses the free press, and arrests his enemies,” Colbert said. “That is not something that I as an American or a member of the press can respect. And I’m surprised that you do respect that.”

And given how journalists are treated in Putin’s Russia, Colbert doesn’t believe Putin would be a hero of free speech like Stone is.