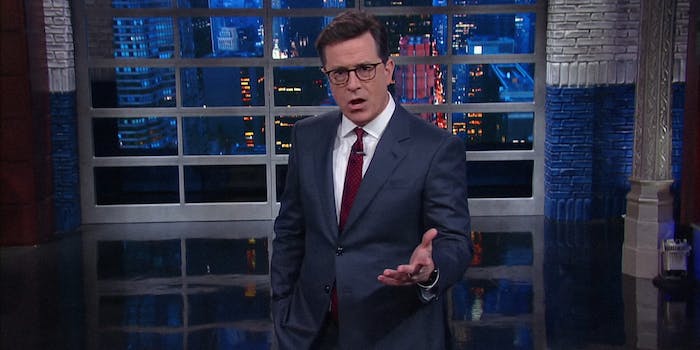 The Federal Communications Commission announced Tuesday that it won’t take action against Stephen Colbert for a crude joke he made about Donald Trump and Vladimir Putin on The Late Show, which had prompted complaints from viewers.

Colbert made the comment, in which he told Trump that “the only thing your mouth is good for is being Vladimir Putin’s cock holster,” on May 1, which drew ire from Trump supporters and some members of the LGBTQ community, who felt the joke was homophobic. Colbert refused to back down or apologize, but acknowledged that he could’ve been less crude and called “anybody who expresses their love for another person in their own way … an American hero.”

Some viewers complained to the FCC, and FCC Chairman Ajit Pai said it would review Colbert’s joke. Headlines formed from Pai’s comments sparked fear that the FCC was “investigating” Colbert, although media experts pointed out that the FCC has to review every complaint and that Colbert’s comments would fall into the “safe harbor” period, the time between 10pm and 6am where there are less restrictions on what people can say.

Given the time of his comments, which were bleeped when they aired on CBS, it was expected to have a hard time passing the FCC’s three-pronged test for being obscene.

And the FCC agreed. According to FCC spokesman Neil Grace, the FCC “concluded that there was nothing actionable under the FCC’s rules.”

Even before the ruling came in, Colbert was already joking about the FCC’s review of his show.

“It’s been an honor to be on stage and talk about that day’s Trump scandal,” Colbert said at CBS’s upfronts last week. “There is only one word to describe this president–and the FCC has asked me not to use it anymore.”