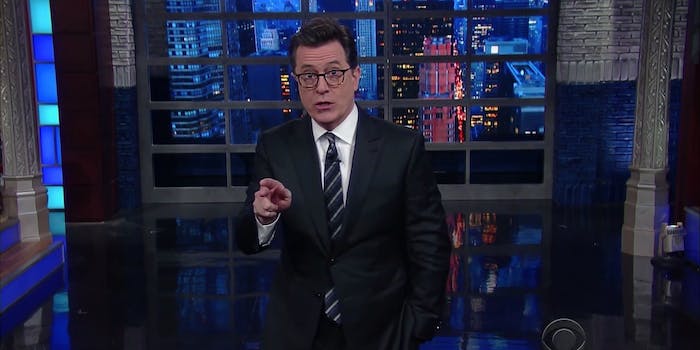 Stephen Colbert is mocking Donald Trump’s latest tweetstorm after the president’s unfounded claims of wiretapping over the weekend.

Although Trump received positive press for his address to Congress, the “new Trump” didn’t last long at all, which Colbert demonstrated by noting the White House had to turn its “Twitter freakout” counter back to zero. His accusations dominated the news cycle, and as Colbert demonstrated how baseless the claims were, he still couldn’t get over the time the tweets were sent.

“Who wakes up that angry?” Colbert asked. “Somebody get this guy a Xanax or a bran muffin. Or a bran muffin stuffed with Xanax. Like a Branax.”

But in the end, Colbert wants to keep the man with the nuclear codes calm, so he added in a news segment just for Trump. It’s about as much of a puff piece as you’d expect.