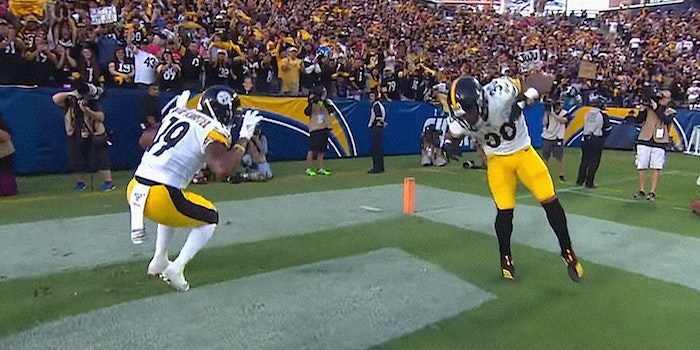 How to stream Steelers vs. Colts live

A suddenly frisky Steelers team will try to knock off a Colts team that has been the surprise of the AFC.

The Pittsburgh Steelers are showing signs of life, but can they beat a good team like the Indianapolis Colts?

Following the loss of quarterback Ben Roethlisberger for the season, it seemed all was lost for the Steelers. But, thanks to competent play from their backups and a defense that is constantly generating turnovers, Pittsburgh is somehow still in the mix.

The Steelers defeat of the Dolphins on Monday Night Football last week demonstrated how Pittsburgh can win games. Mason Rudolph was decent in passing the ball, allowing running back James Conner to do the bulk of the offensive work. Conner had 145 yards on the ground and JuJu Smith-Schuster went over 100 yards through the air.

Pittsburgh’s defense creates opportunities for this subpar offense. The Steelers had four sacks and four turnovers against the Dolphins. The week before, they picked off Philip Rivers twice. The Steelers are serious ball hawks.

Even in victory, when you watch the Steelers, you get the sense that they are coving for the poor play of quarterback Mason Rudolph. Though he is a solid backup, he hasn’t yet had an inspiring game like some other replacements QBs like the Jaguars’ Gardner Minshew or the Colts’ Jacoby Brissett.

Brissett has put up bonafide starting numbers this year, leading the Colts to first place in the AFC South. Though he doesn’t yardage of some elite quarterbacks, Brissett’s smart play combined with Marlon Mack’s breakout season as a runner has been a winning combination.

The Colts defense hasn’t been as impressive. While their defensive line has played well, both in terms of getting pressure and stopping the run, Indy has had trouble in the secondary. Against the Broncos, rookie safety Rock Ya-Sin got flagged five times and still gave up significant yardage. And he isn’t the only Colt struggling against the pass.

Indianapolis clearly has the better offense. The Steelers are better on defense. But this isn’t an even matchup. The Steelers’ defense has had to play amazing football to put their weak offense over the top in recent weeks. If Mason Rudolph has another week where he completes only about half of his passes, Pittsburgh will probably lose.

The Colts have the edge here, but if Pittsburgh generates another one of these five-turnover games, they could pull off an upset.

There are a number of options for watching Steelers vs. Colts on streaming platforms that carry CBS. However, consult a coverage map to see what game your regional channel will be playing.

Steelers vs. Colts live stream: How to watch NFL online

Diontae Johnson, Wide Receiver: Pittsburgh probably can’t sustain multiple wide receivers week to week, but if you are short on receivers in Week 9, look at Johnson. The Steelers expect big things from him and he finally started to show promise against the Dolphins with 84 yards and a touchdown. Even if you aren’t playing him week-to-week, he could be a nice dynasty or keeper option. He isn’t JuJu Smith-Schuster, but he could be a useful flex option in a pinch.

Marlon Mack, Running Back: It is tough to trust anyone in Indy besides Mack and T.Y. Hilton despite the Colts’ real-world success. Though Pittsburgh is good on D, you can run on them. And Mack produces for fantasy owners almost every week.

Pittsburgh Steelers vs. Indianapolis Colts: Why it matters

The Steelers and Colts are both in competitive situations, though in different ways. Pittsburgh’s odds at a postseason berth are pretty long, but their weak division has kept the door open. If the Steelers can get to .500, they could make a run at the wild card.

Indianapolis is trying to hold off the Texans from taking first place in the AFC South. Houston has a more explosive offense, but the Colts have beaten good teams with disciplined play. If Indy slips a bit, you have to imagine the Texans will capitalize. But, for now, the division is theirs to lose.

The Colts have the edge in this game, but the Steelers might put up a good fight. Don’t be surprised if this is one of the more exciting Week 9 matchups.