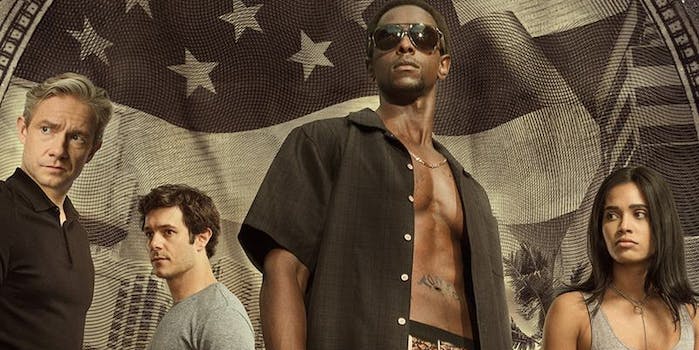 It’s junkfood viewing all the way—and we all need some empty calories.

Some shows take a while to get going, with their bloated character introductions and glacial plot development. Others open with an FBI agent sitting bedside, while a couple has sex, before trying to extort the man for nearly $2 million. StartUp, the new hour-long series from streaming service Crackle—home of Comedians in Cars Getting Coffee—falls into the latter category.

The titular startup is an online currency called GenCoin (think Bitcoin), created by wunderkind Izzy (Otmara Marrero), funded by financier Nick (Adam Brody, who also executive produces). He got the money from his dad, who launders money for the kind of people who need money laundered, including Haitian gangster Ronald (Edi Gathegi), who got his money from the neighborhood gang fund. StartUp is a show about people badly in over their heads, whose need for the money at the heart of the plot drives them far off the courses they thought they would be on.

The GenCoin trio of Nick, Izzy, and Ronald has a fun dynamic on paper. Brody is right in his wheelhouse as Nick, a rich guy whose closest brush with danger is letting the parking meter run over a few minutes. Brody’s as affable as ever, playing Nick with a calm demeanor that turns into nervous energy at the first sign of trouble. As Ronald, Gathegi gives the show’s best performance. Think Stringer Bell from The Wire, another famous fictional gangster who wants to bring some legitimacy to criminal activity. Gathegi commands the screen simply by staring people down. He uses stillness as well as Ronald uses a gun.

Ronald’s aspirations of doing something honestly clash with his natural impulses to assert dominance, and it’s a dynamic that’s volatile and captivating. The brains of the operation is Izzy, most confident behind a keyboard. She lacks the corporate experience of Nick and the criminal confidence of Ronald, but is marked by her desperation to prove that GenCoin can do what she says, show her parents that she’s not wasting her life, and prove that she can be more than what she came from.

Looming over the group is Agent Rask (Martin Freeman), a Vic Mackey type who’s comfortable operating on either side of the law. Rask is a collection of bad cop clichés, but he later becomes unhinged in a way that drives proceedings forward. There’s a controlled chaos to Freeman here, one that’s up and down. To Freeman’s credit, Rask doesn’t come across as a total cartoon; but he’s not able to salvage some of Rask’s more outlandish bits. (The eye-rolling, opening sextortion scene for starters.)

Through five episodes the show’s trajectory isn’t all that dissimilar from GenCoin, which is to say it’s bumpy getting off the ground. It eschews the slow-developing plotting of many major dramas, but despite the fast pace out of the gate it still takes a few episodes to hit its stride. It’s trying so hard to impress that it initially comes off as abrasive: How else to describe a show that boasts three sex scenes in the first 15 minutes? Yet the fireworks do enough to keep you strapped in.

The show stumbles when it goes sincere and aims for prestige dramatics. The damaged father-son relationship from Nick is generic at best. But that pales in comparison to the home life of Izzy, who is constantly at odds with her mother. It leads to arguments punctuated with lines like “I let him come in me for a year, so don’t tell me about sacrifice!”

On the opposite end, Ronald has a relatively happy home, but trouble is brewing as his oldest son becomes more involved with gang life. Their territory in Miami’s Little Haiti is being threatened, so Ronald feels the pressure from both parts of his life; Gathegi’s struggle to reconcile the two in his performance is heartbreaking.

Despite the immediacy of the show’s interests in digital currency, and showing the effects of rampant white-collar crime, it’s hard to pinpoint a prevalent theme that resonates. That’s why the show doesn’t rise above its genre trappings. But five episodes you’ll give in to the action and pulp: It’s junkfood viewing all the way—and we all need some empty calories.

StartUp premieres on Crackle Sept. 6. Stream all 10 episodes for free.