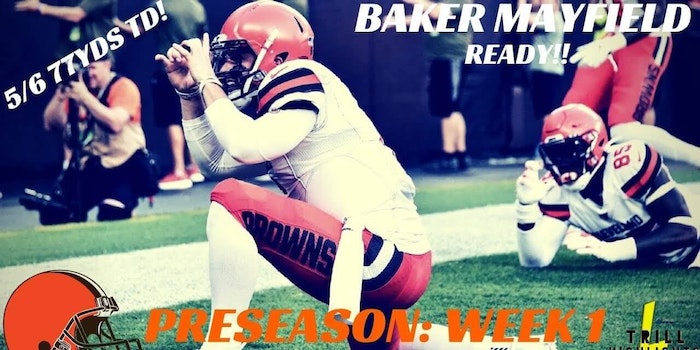 This is the big one.

Some of these games have been bad, yes. With the starters spending more time on benches during the preseason it takes a few weeks to get the wrinkles out. Unfortunately, some of these teams are already in need of digging a hole and burying the memory of their teams deep in the recesses of the earth. But enough about the Giants.

One way to make the game better and more efficient would be to add a chip to the ball. Exact spots. Use lasers or some shit. Watching these referees run in from the sideline and then guess where to lay it down is madness. Mostly the NFL is stuck in the ’70s. That’s the thing about America, though. So afraid of the future.

We must look to the future, though, because Week 3 is here and we probably know where we’ve gone wrong. If you’re 0-2 how bad were the losses? If it’s time to panic, you’ll know. It’s time to be honest with yourself. The future depends on it.

Mike Evans appears to have found himself in hot water. Take heart, the worm will turn. Or maybe it won’t because Jameis Winston is inconsistent and mostly bad as his quarterback. Anyway, Evans now gets to face softer defenses which should help him to get off the ground.

Sometimes greatness might’ve been in front of you the whole time. Last week, reading through old Twitter posts, there was buzz about a guy named Damarcus Robinson. I scooped him up last week for free off waivers in two leagues (started in one, still lost). He’s only 24, this breakout Florida prospect now enjoying that Kansas City offense. Had some troubles in the past, but he’s talented. Now, the rub is it’s crowded there. But there’s also an added element of Patrick Mahomes throwing the ball. I wish the NFL would make touching Him illegal. Anyway, Robinson might not score 35 fantasy points again, but do you want to find out if he doesn’t? What if he’s Priest Holmes?

Baker Mayfield vs. Los Angeles Rams: This is the big one. He looked like he was warming up against the Jets. Headlines after this one could read “Baker Found His Sugar” and “Mayfield of Flowers Covered in Dew.” We can edit them later. Listen: Every guy has his breakout. It’s coming. Let’s not miss it especially against a team on the road whose offense is also waiting to breakout. Have patience. And pass me that second bowl. It’s already loaded.

Jacoby Brissett vs. Atlanta: He’s quietly hanging solid numbers. And Parris Campbell, another guy you’ll want to probably look at on the wire, caught his first NFL TD. And now he gets an Atlanta team that’s not very good and downright pungent on the road. Coming off a W and getting to come home is a sweet place to be. Jacoby gonna have a banquet. And you’re invited.

Philip Lindsay at Green Bay: I know there must be overwhelming apprehension for him right now. But Denver is gonna have to speed things up if they have any chance in this game. The Packers lit up a very good Minnesota defense and though they sputtered, they dictated most of what happened from start to finish. But there were lanes and plenty of space in the flats where Dalvin Cook thrived. He ain’t Dalvin but he could be half of him. Or maybe GB’s D is the hammer. We will know soon, I guess.

Matt Breida vs. Pittsburgh: On just 12 carries he ripped off 121 yards. His long was 34 so he was running free more than once. This is a guy who everyone loved preseason and there’s no feasible way they don’t try to work him in more. And Pittsburgh is a sewer fire.

Christian Kirk vs. Carolina: Every time I see his name I yell “He’s heating up!” in my NBA Jam announcer voice. He went for 6-114 and now has 20 targets on the year. This is going to accelerate quickly so don’t wait. I admit to fading this offense, but I was wrong. And when you’re wrong, admit it. Then don’t ever do it again.

Jamison Crowder at New England: There should be a continuous flow to Crowder who can work underneath and not get too far from the line of scrimmage since Trever Siemian just isn’t good. But, as the great @ClutchFantasy pointed out, maybe Kissing Sammy Darnold isn’t any good either?

Things that make you go hmmm..

O.J. Howard vs. New York Giants: Bruce Arians, the whisperer of QBs, the wearer of funny hats, the ruiner of fantasy backfields, called O.J. out in the media. Helluva thing to throw a TE under the bus when you have your QB already down there licking the asphalt. Shit, call it a hunch, but for a week maybe things click and O.J. resurrects himself. If not, cutting time is upon us.

Buffalo vs. Cincinnati: They’re coming home and they’re 2-0. And they get a Cincy team that has been drubbed the last two weeks. That whole stadium will be filled with lunatics and their leader, Josh Allen, is perfect for these madcaps. Godspeed, Bengals.

Andy Dalton at Buffalo: Perfect segue into the Red Rocket. I want no part of this. And you shouldn’t either. He’s been solid so far, considering what’s transpired on the scoreboard. Buffalo has shut down two other mediocre QBs—Darnold, who I was also wrong on and Eli Scamming—so what’s one more?

Cam Newton at Arizona: It feels over and I hate it. This guy played harder and tougher than anyone in recent memory. Just flat-out went out and challenged everyone. Looking back I bet he wouldn’t have done anything differently. That’s what makes him great and tragic at the same time. People have already written his football obituary and I won’t pontificate any longer. I’ll miss him. Gone too soon. But, seriously, just go. I hate goodbyes.

Josh Jacobs at Minnesota: A rookie running back on the road against a defense looking to bounce back is a recipe for disaster. You can have this. And while you’re here take David Carr with you. Quit trying to correct me.

Devonta Freeman at Indianapolis: What the hell is going on? I haven’t watched a snap of an Atlanta game but it’s good to know I haven’t missed anything.

Terry McLaurin vs. Chicago: He’s been impressive. And he was a must-add last week and he’ll get his the rest of the season. But this ain’t it.

D.J. Chark vs. Tennessee: He’s turned in two solid performances but Tennessee should upset any consistency. It’s a great sign he received nine targets from Gardengnome Creamshoe but I’m not going near this game. It’s on a Thursday, the day they feed us the trash.

Feed us the trash on Thursdays because they know everyone needs that distraction fix after a week of shitty national news and dickheads acting like dickheads. I can't wait to watch actually. Go Jags.

Delanie Walker at Jacksonville: Please refer to the player above.

New England at New York Jets: I know what you’re thinking. They went in and roundly defeated Miami. Maybe they did. Crazy times and no end in sight. Fifty years from now in some obscure documentary titled “Brain Killer Sport,” we will discover Robert Kraft owned not only the Patriots, but also the Jets, Bills, and Dolphins. If you have a better explanation for these horror-show franchises and the rosters they’re prancing out there, I’d love to hear it. We all deserve better. This isn’t just about New England’s dominance in the division, but league-wide. This is about these franchises’ irresponsibility and neglect. They are supposed to be a functioning part of the damn society. But they don’t contribute diddly. If we are to ever get anywhere in life, everyone must be working together to keep other assholes in check. If you claim to be a part of society then have the decency to not be a complete deadweight. For the love of all things good left in this miserable world, hire a new GM or coach or president. Go Jets.