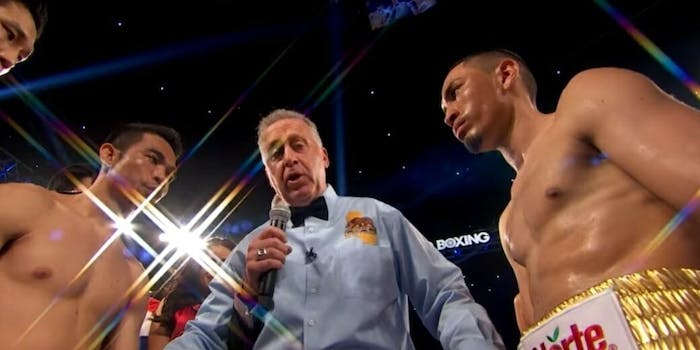 How to stream Srisaket Sor Rungvisai vs. Juan Francisco Estrada

Their first fight in 2018 was one of the best of the year.

Srisaket Sor Rungvisai proved he’s the best 115-pound super flyweight in the world when he earned the majority decision against Juan Francisco Estrada last year. The bout was widely considered one of the best fights of 2018, and on Friday, the two are set for a must-see rematch.

Here’s everything you need to know to live stream Rungvisai vs. Estrada on DAZN.

The only way to watch Rungvisai vs. Estrada in the U.S. is to stream it on DAZN. If you want to pay for it on a monthly basis, it’ll cost you $19.99 per month. But if you commit to a full year, it’ll cost you $99.99, effectively saving yourself about $40 over the 12-month span. It’s a good deal for boxing fans.

DAZN has been a boon for boxing and MMA fans since it opened for business in the U.S. last September. The streaming service is the exclusive home of Canelo Alvarez, Anthony Joshua, and Gennady Golovkin—three of the most popular fighters in the world. Even with the recent price change, it’s one of the best deals in sports streaming, especially with DAZN trying to kill the longtime boxing PPV model.

Rungvisai vs. Estrada: Why it matters

Before March 2017, Rungvisai (47-4-1, 41 knockouts), a Thailand native, was virtually unknown everywhere but Asia. Although he had accumulated more than 40 professional fights, he had made three straight appearances against boxers who were making their pro debuts—a bizarre stat, to say the least. His two opponents before that had combined for a record of 15-24. At the time, he was fighting absolute nobodies.

He was set to fight Roman “Chocolatito” Gonzalez—considered by most boxing observers to be the top fighter in the world at the time—in 2017, but not many people gave Rungvisai much of a chance. Yet he beat Gonzalez in a surprising upset (even though most people believe Chocolatito actually should have been given the judges’ decision). Six months later, he knocked out Gonzalez to prove he was now the best at super flyweight.

Five months later, he beat Estrada by majority decision in one of the most exciting bouts of the year.

Estrada (38-3, 26 KOs) has some excellent wins on his résumé, including victories over Brian Viloria, Giovani Segura, and Carlos Cuadras. But he fell against his two toughest opponents—Chocolatito in 2012 and Rungvisai in 2018.

Estrada is the slightest of underdogs at +110, meaning you’d win $110 if you bet $100. This time, Estrada said he’s going to end the fight early, so he doesn’t have to worry about the judges making a decision on the winner.

“We will not leave doubts. We come prepared, I feel much better than for the first fight and I have no doubt that we will go for the knockout,” Estrada told ESPN Deportes, via Boxing Scene. “We already know each other, we know what we are bringing and I am sure it will be a great fight.”