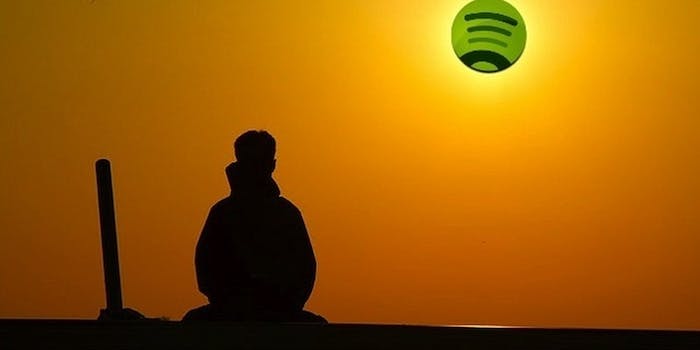 Spotify’s massive library of subliminal messages will make you perfect

Here's another dispatch from the outer limits of Spotify.

First Spotify blew my mind. Now it wants to tap into it through the backdoor.

After resisting its pull for ages as a cratedigging Luddite, I finally downloaded Spotify last year. Within months I became a full-on helpless addict, paying my Spotify bill before all others and ruthlessly binge listening to artists I discover, come to love, and vow to someday buy the vinyl of.

I’m also a big fan of just poking around Spotify’s library and seeing what’s there, and have lost hours of my life to this hobby. There are conspicuous absences—just try to get the Led out, for instance—but why would you want to hear something that FM radio shoves down everyone’s throat every day at five anyway?

Instead, via the massive Smithsonian Folkways library, you can listen to chants from “Music of the Waswahili of Lamu, Kenya” but there’s so much on there to hear, why listen to music at all?

You can listen to Spotify’s kind of narrow selection of poems or its wider variety of bird calls. You can even do as I’ve done and get into Spotify’s massive selection of subliminal messages.

Now, the general consensus in the scientific community seems to be that subliminal audio messaging doesn’t actually do anything, but given that Spotify has several types of subliminal messages and hypnosis, how can I really be sure? And since I can load up on them and run as many as I want a month for the same price as one CD used to run, why the hell not?

The variety is pretty interesting. There are some tracks with what seems to be murmured speech behind sounds of rain or the ocean, or a crackling fire, or some general New Age ambience with occasional bird sounds or sounds of nature. The hypnosis has a gentle voice coaching you to relax and then affirming the hell out of you, which is nice.