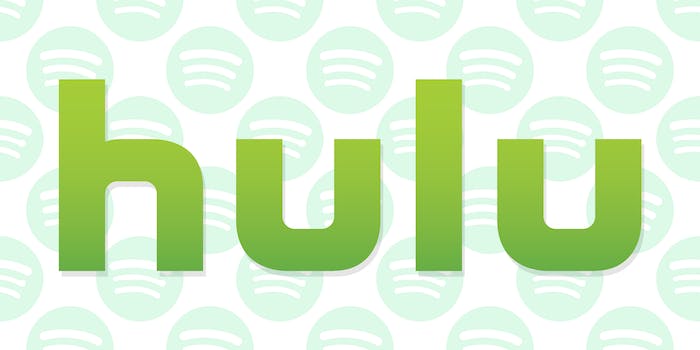 How to bundle your Spotify Premium and Hulu subscriptions

Get your favorite tunes and TV shows all wrapped up in one.

If you subscribe to Spotify Premium, you can now get Hulu for free.

Juggling streaming services to meet all of your multimedia needs adds up—and usually saddles you with a costly bill each month. Thankfully, Hulu has already teamed up with premium movie channels like HBO and Showtime to bundle services. Now you can subscribe to Spotify Premium too—and save some money while you’re at it.

The two originally synced up in July 2018, offering a combination of the two services for $12.99 per month. But they’ve gone one step further now, offering Hulu for free to anyone who uses Spotify Premium ($9.99 per month). After a recent price drop from Hulu, that brings your savings to $6 per month, but it comes with a few catches

But what about users who want to stream TV shows and music? It turns out Hulu has something that combines both in one neat package, thanks to its partnership with Spotify. Users can subscribe to both for one low cost (with a few catches).

Here’s everything you need to know about Hulu and Spotify.

How to bundle Spotify and Hulu

Hulu and Spotify: How does it work?

To access the deal, you’ll need to sign up via Spotify Premium. Your billing will be handled by Spotify each month, so don’t go looking for Hulu in your emails. Once you finish signing up, Spotify will direct you to create a Hulu account. If you’re already a Hulu subscriber, you can take advantage of the deal by having your billing changed over to Spotify. Note: This doesn’t work if you’re already being billed through a third party like Apple iTunes or Roku.

Once you’ve switched your billing, you’ll be able to stream your favorite Hulu shows and Spotify playlists until your eyes explode and your ears burst. Though we don’t recommend that.

Spotify and Hulu: What are the limitations?

Hulu subscribers who bundle their service with Spotify can only access Hulu’s basic paid service. That means no ad-free viewing plans or add-on channels like HBO or Showtime. As long as you’re under the Spotify/Hulu promo banner, you won’t be able to upgrade your package without paying for individual Spotify and Hulu accounts.

Spotify fans meanwhile are locked out of buying Family plans during the duration of their bundled service. Hulu fans are conceding the most ground with this package.

Your bundled Spotify and Hulu subscription will set you back $9.99 per month, saving you $6 per month. More importantly, it combines two separate bills into one, cutting down on clutter in your email.

Students get an even better deal. People enrolled in a confirmed university can access Spotify with Hulu for just $4.99 per month. If you’re a college student and you aren’t taking advantage of this deal, your friends should shame you.

What are the pros of the Hulu Spotify bundle?

Saving money is a good thing, and for the average Hulu user, the basic plan is a great deal. Skipping commercials is a luxury, and ads are always a great time to stretch your legs. Hulu features more content than you could ever watch. Spotify gives you access to nearly every album recorded in the modern era. For just $9.99 per month, you get access to two wings in pop culture’s Library of Alexandria.

What are the cons of the Spotify Hulu bundle?

Hardcore TV fans might not find this deal worth the sacrifices. Bundled subscribers can’t use some of Hulu’s best features, including Hulu with Live TV and add-on channels like HBO. While you can easily get those features other places like DirecTV Now or  HBO Go, that means subscribing to yet another service. If Hulu is your go-to spot for live streaming TV, saving an extra couple bucks a month on your music might not be worth the sacrifice.

Is the Spotify Hulu bundle worth it?

If you’re using Spotify Premium for Family, you’re better off adding Hulu as a standalone service, especially if you want to be able to skip commercials. But if you’re looking to save some money and don’t need all of Hulu’s bells and whistles, this package is the best deal in either the streaming or music business. Jump on it now before it’s gone.