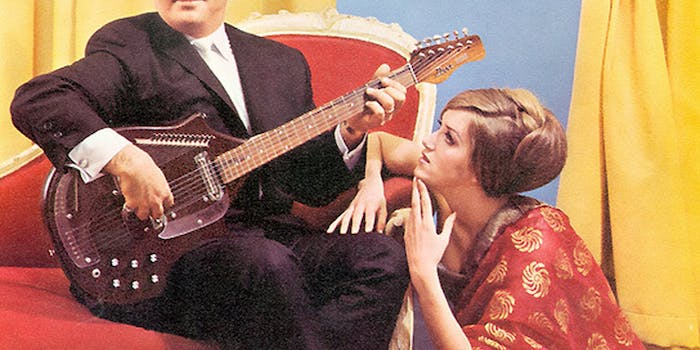 While often associated with Ravi Shankar and the Beatles, rhe sitar reared its many vibrating strings on plenty of soul and funk songs of the late Sixties.

Blame it on the Beatles.

When George Harrison laced “Norwegian Wood (This Bird Has Flown)” with that distinctive resonating buzz in 1965, it spawned a five-year run of imitators who used the sitar like a psychedelic crutch. The Indian stringed instrument is most closely associated with Ravi Shankar, of course, who gave lessons to Harrison and passed away in December at the age of 92.

The Rolling Stones, Grateful Dead and Donovan all incorporated Indian music into their sound, but the fad wasn’t limited to folk hippies, psych heads, and Fab Four imitators. The sitar reared its many vibrating strings on plenty of soul and funk songs of the era, particularly after Danelectro developed the Coral Electric Sitar in 1967 to cash-in on the craze.

The best known tracks in the micro-niche genre I’m coining “SITAR&B” have to be “Chain of Fools” and “Signed, Sealed, Delivered (I’m Yours),” both of which feature a sitar intro and catapulted Aretha Franklin and Stevie Wonder to the top of the R&B charts in 1967 and 1970, respectively.

Joe South plays the instrument on “Chain of Fools” and further explores the sitar on his solo work, including “Games People Play.”  For South’s more left-field output not found on Spotify, check out the Believers’ instrumental sitar freakout “Soul Raga Cookin’.”

Hits from Aretha and Stevie used the sitar with discretion.  The same can’t be said for Peggy Scott & Jo Jo Benson. The duo released a pair of LPs in 1969—Soulshake and Lover’s Heaven—on which electric sitar takes center stage on nearly every track. Played by Jerry Kennedy, the instrument gives the albums more of a downhome country twang rather than any sort of exotic vibe.

Always a melting pot, the sitar popped up on more New Orleans records than those from any other soul town. That was all thanks to one man, the Meters’ guitarist Leo Nocentelli, who fell in love with the sound of the Coral electric. The Meters served as backup band for countless studio sessions (Lee Dorsey, Dr John, etc.), which explains how the instrument cameos on so many Crescent City sides of the late 1960s. Sadly, Cyril Neville’s “Gossip” and the burning funk of “Pop, Popcorn Children” by Eldridge Holmes can’t be found on Spotify, but they’re certainly worth a listen. The Meters’ most obvious nod to India comes on 1969’s “Oh, Calcutta!” but you’ll also hear Nocentelli’s electric sitar on this playlist behind NOLA R&B royalty Allen Toussaint and Lee Dorsey.

Ravi Harris & the Prophets flip the script, covering the Meters’ “Cissy Strut” and other classic grooves on the surprisingly listenable Funky Sitar Man. Not some lost funk fusion artist, Harris is in fact Daptone Records founder Gabriel Roth masquerading as a California funk-obsessed mystic. If this sounds like early Dap-Kings infused with a heavy dose of sitar, that’s why.

Bringing the mix a step closer to the man himself, Ravi’s nephew Ananda Shankar makes an appearance with 1975’s “Streets of Calcutta,” a rolling groove laced with nasty funk drums.

George Harrison dubbed Ravi Shankar the “Godfather of world music.” With all due respect, I’ll just call him the real Funky Sitar Man.