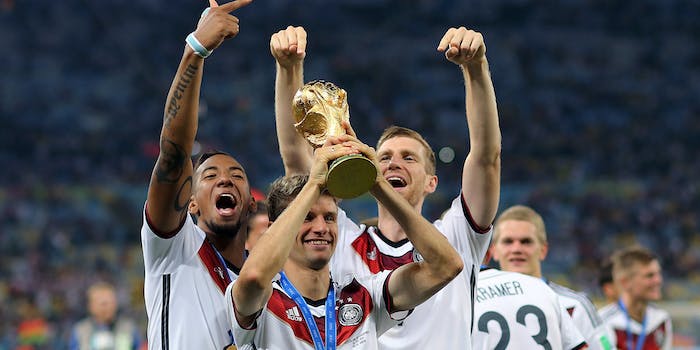 How to stream Germany vs. Spain live in UEFA Nations League

Germany vs. Spain: That makes any soccer fan sit up.

International soccer comes back in a big way Thursday with UEFA Nations League. Here’s what you need to know to stream Germany vs. Spain live.

UEFA Nations League: How it works

Germany and Spain have been grouped together along with Switzerland and Ukraine, in what many have called the group of death in League A. Both nations finished atop their groups in Euro 2020 qualification last fall, and both nations have a World Cup win in the last decade.

World Cup 2018 was not pretty for either country, with the Germans getting knocked out in the group stage and the Spaniards losing in the round of 16 to hosts Russia.

Luis Enrique has returned to the head job in Spain after stepping down for four months due to personal reasons, and has his squad playing as well as they have been in the recent years since the 2010 World Cup. Spain went undefeated in Euro qualifying, with eight wins out of ten and a +26 goal differential.

Joachim Löw has kept his job entering a 14th year in charge, due to the good-will built up before Germany’s embarrassment in 2018. The Germans are always a favorite at major tournaments, and place well if you exclude 2018. The team is in good form since Russia, having won seven of eight games in Euro Qualifying.

Here is how Germany lined up in the European Qualifiers against Northern Ireland in November:

Here is how Spain lined up in the European Qualifiers against Romania in November:

The Germany vs. Spain odds, via the William Hill Sportbook:

Stream UEFA Nations League live: How to stream on ESPN+

UEFA Nations League has returned, and is available exclusively on ESPN+ and the ESPN family of networks. The new competition will make its US network debut on September 5th, when Iceland vs. England and Portugal vs. Croatia will air back-to-back on ABC.

Here is how to watch on ESPN2, or stream Germany vs. Spain.

ESPN+ has partnerships with Major League Baseball, a number of soccer organizations and leagues around the world (including UEFA, the English FA, MLS, USL, and Serie A), and UFC. It’s become increasingly essential for sports fans to add it to their streaming set-up.

It’s a great option for sports fans. It comes with ESPN, ESPN2, FS1, FS2, and NBCSN at the ready. Deeper sports cuts, like NBA TV, MLB Network, CBS Sports Network, and ESPNU are also part of the YouTube TV plan.