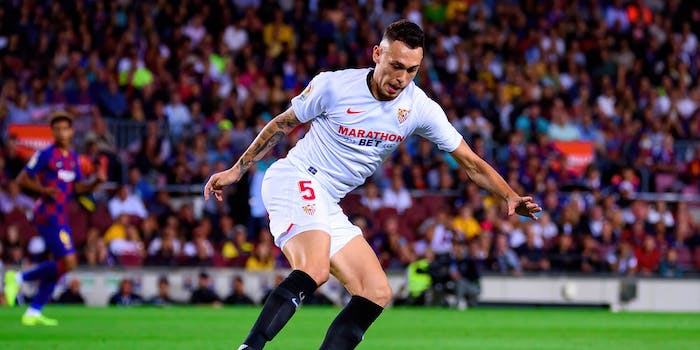 A resurgent Italian power goes up against a five-time winner on Friday.

Friday’s Europa League Final matchup, Sevilla vs. Inter Milan, features one team pegged to reach the finals and one who is a big of a surprise.

Inter Milan took care of its business, defeating Shaktar Donetsk 5-0 in the semifinal. Sevilla upset Manchester United 2-1; the favored Red Devils were even clearly the better team on the day.

Here’s how to find the Europa League Final live stream for Sevilla vs. Inter Milan.

You can find the Europa League Final live stream via CBS All Access and on streaming services carrying TUDN.

Here’s how to stream Inter Milan vs. Sevilla live.

FuboTV started as a streaming service geared toward sports fans, but it’s evolved into a broadly-appealing option with entertainment and news options alongside its robust sports choices. It starts at $54.99 a month, and depending on the package, you can access as many as 180+ FuboTV channels. If you’re looking to be entertained, Bravo, IFC, MTV, and VH1 are options even at Fubo’s most basic tier.

The Fubo channel list still includes plenty of sports, including the Fubo Sports Network, which has original programming mixing sports and humor. The ESPN suite of channels was added as part of an agreement that also brought ABC and the Disney Channel. Pretty much every sports channel you could think of is available through Fubo, including BeIN Sports, CBS Sports Network, and TUDN. (The latter two, of course, will get you the Europa League Final live stream.)

Inter Milan presented a real title threat in Antonio Conte’s first year at the helm, even though the Nerazzurri ultimately couldn’t catch eventual Serie A champions Juventus. 22-year-old Argentine striker Lautaro Martínez had another solid season with 21 goals. Massive signing Romelu Lukaku scored 33 goals across all competitions. This season was a clear step forward for Inter. Conte made them a real contender in Italy, and that status can be reinforced by winning his first trophy with the club on Friday.

Sevilla has been one of the most successful clubs in this tournament with five titles, all since 2006, including three straight from 2014 to 2016. The upset over United in the semifinal was a big achievement as well. Yet it’s not so big that manager Julien Lopetegui will let off. When Sevilla FC is in the Europa League, it means business. Look for Los Nervionenses to be confident no matter what the odds are.

According to BetMGM, as of August 20:

Here is how Inter Milan lined up in the UEL Semifinal against Shaktar Donetsk:

Here is how Sevilla lined up in the UEL Semifinal against Manchester United: