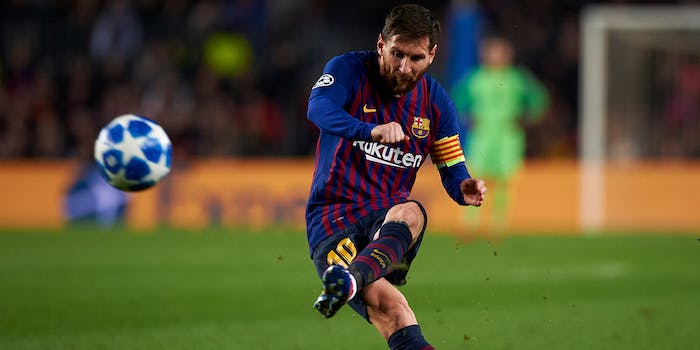 Here's how to watch Barcelona take on Bayern Munich in a Champions League quarterfinal.

Barcelona and Bayern Munich are the only two remaining clubs in the 2019-20 Champions League tournament club to have won. Coincidentally, the two five-time champions face off Friday. Even with late-goal thrillers in the previous two Champions League quarterfinal matches, this match has the potential to be the best of the four.

The Barcelona vs. Bayern Munich winner will face either Manchester City or Lyon for the right to play the PSG-RB Leipzig winner.

Here’s how to catch the Barcelona vs. Bayern Munich live stream.

Barcelona vs. Bayern Munich live stream: How to stream the UEFA Champions League

You can stream Champions League live on CBS All Access.

Barcelona has one last chance to win a trophy in this elongated season, but the oddsmakers don’t think they’ll get past the Bayern hurdle. Barcelona hasn’t quite looked like an elite team since the soccer world restarted in June. Barca couldn’t get results down the stretch in ceding the La Liga title to Real Madrid. And yet, Lionel Messi has had a brilliant season; he may be uniquely qualified to carry Barca into a semifinal past a formidable opponent.

Bayern Munich has won every game but two in 2020, and has not dropped a single point since drawing with RB Leipzig back in February. The Bavarians won an eighth straight Bundesliga title anda record 20th DFB-Pokal. It demolished Chelsea in the previous round of the UCL 7-1 on aggregate. Striker Robert Lewandowski might have been a favorite for the Ballon d’Or this season if it had been given out, and Canadian sensation Alphonso Davies is in the midst of a breakout season. If they can’t shut down Barca, they certainly have the ability to outscore them.

According to BetMGM, as of August 14:

Here is how Barcelona lined up in the Round of 16 second leg against Napoli:

Here is how Bayern Munich lined up in the Round of 16 second leg against Chelsea: