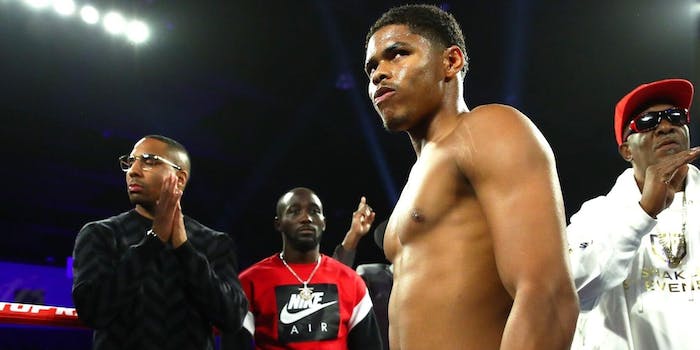 Shakur Stevenson vs. Felix Caraballo live stream: How to watch without cable

Shakur Stevenson is back ... and so is live boxing.

For the first time in three months, boxing fans on Tuesday night will have something live to watch. Shakur Stevenson, one of boxing’s potential future stars, is the first to lead off the twice-weekly showcases in June and July that the Top Rank promotional company will be putting on for ESPN, and though his opponent, Felix Caraballo, is unknown and shouldn’t give Stevenson many problems, it should be fun just to see two professionals exchange punches in a live setting (even in a room without fans).

“We are all looking forward to a spectacular summer of live boxing across ESPN platforms,” Top Rank CEO Bob Arum said when the fight was announced. “Shakur is among the best young talents I’ve ever promoted, and he is going to put on a show on June 9.”

Though the co-feature bout for Tuesday’s show was canceled after the undefeated Mikaela Mayer tested positive for the coronavirus, the show will continue with Stevenson in the main event and Robeisy Ramirez, a two-time Olympic gold medalist from Cuba, on the undercard.

Here’s everything you need to know to stream Stevenson vs. Caraballo.

How to watch Stevenson vs. Caraballo

Stevenson vs. Caraballo will be the main event on the ESPN card that begins at 7pm ET, and though the Mayer fight vs. Helen Joseph has been pushed off the card, the rest of the undercard will be available to watch. Most of the major live streaming services offer ESPN, and all of the ones featured below include a free one-week trial. Meanwhile, here’s how to watch ESPN+ and what the network’s streaming service has to offer.

Hulu with Live TV is one of the most popular ways to stream live TV, mostly because you gain access to a massive library of on-demand content including classic and current TV shows and movies along with Hulu’s original programming. As far as live-streaming goes, you’ll have a ton of local, entertainment, and sports channels to peruse, including HGTV, a full suite of ESPN channels, Cartoon Network, FX, and even deep cuts like Nat Geo Wild and Syfy.

Stevenson vs. Caraballo: Why it matters

Stevenson was supposed to fight the solid Miguel Marriaga in March, but only two days before they were to step into the ring, the bout was canceled as the coronavirus began to make its way around the globe. With Marriaga presumably in his native Colombia and unable to return to the U.S. for the rescheduled fight, Top Rank then tried to sign Rafael Rivera to a deal to face Stevenson. But Rivera reportedly is stuck in Mexico.

Now, Stevenson turns to Caraballo, a native of Puerto Rico who will try to pull off a huge upset (Stevenson, after all, is a -5000 favorite, meaning you’d have to wager $5,000 to win only $100). Stevenson doesn’t see himself losing.

Even though the pandemic shut down heavy training and sparring for most fighters, Stevenson said he’s not worried about feeling rusty.

If Stevenson (13-0, 7 knockouts) were to struggle with Caraballo (13-1, 9 KOs), it would certainly be a cause for concern. Caraballo has never fought outside Puerto Rico, and the opponents he’s faced are unnoteworthy. Unless Caraballo gets lucky and lands a hard punch that knocks out Stevenson, it seems like he virtually has no chance to win.

But in the first fight back from the pandemic, you can forgive Stevenson for taking such a soft touch. Don’t tell that to Caraballo, though. He thinks he’s got the talent to score what would be a life-changing victory.

“If he thinks I’m an easy fight, well, I’ll let him know the day of the fight I’m going for it,” Caraballo said, via Boxing, Scene. “I’m going to give it my all. I’m going to leave my heart in that ring. I hope he don’t think I’m an easy one. If he does, it’ll work out in our favor. Some people say that he could be overlooking me, that he thinks I’m not a good fighter or I’m not dangerous for him.

“But this is my big opportunity. If he’s not prepared like he usually is and he thinks I’m easy, I know it’s going be a long night for him. Just like I always say to everyone, nothing is guaranteed in boxing. He’s human, just like me. He has two hands, just like me, and anything can happen.”