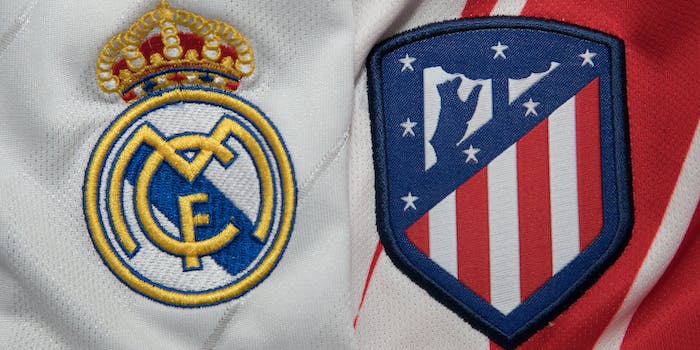 Stream Atletico Madrid vs. Real Madrid: How to watch the Madrid Derby

Stream Real Madrid on Sunday in a huge Madrid Derby match against Atletico Madrid, in a match with huge La Liga title implications.

Here is everything you need to know to stream Atletico Madrid vs. Real Madrid.

Atletico Madrid beat Villarreal 2-0 last Sunday, getting the win thanks to a first-half own goal and a second-half Joao Felix goal. That kept Atleti above both Real and Barca in the standings, though a Real win on Sunday would tighten the race considerably. An Atleti win, though, would bring the team a crucial step closer to its first title in seven years.

Real Madrid needed a late goal from Vinicius Junior to salvage a draw against Real Sociedad on Monday. The result keeps Real Madrid in title talk, though this match’s importance can’t be underestimated.

According to the oddsmakers at BetMGM (as of Mar. 7):

The U.S. La Liga rights belong to beIN SPORTS, which can be streamed from the following platforms:

Pretty much every sports channel you could think of is available through Fubo, including BeIN Sports to catch a Real Madrid live stream. CBS Sports Network and TUDN are also findable via Fubo. To get the most sports, consider adding the Sports Plus with NFL RedZone add-on at $10.99 a month to a robust Fubo Elite package.

You can stream Real Madrid in English and Spanish via the World Sports package for $10 a month, and you can get just the Spanish version for the same price in Sling’s Best of Spanish package.

With Fanatiz, though, you can stream Real Madrid, Barcelona, and the rest of La Liga for just $7.99 per month.

Fanatiz also carries Gol TV and TyC Sports, giving access to competitions like the CAF Confederations Cup, the Copa Libertadores, the Copa Sudamericana, and the Copa del Rey. Plus, it has additional content that will appeal to Boca Juniors and Real Madrid fans in particular.