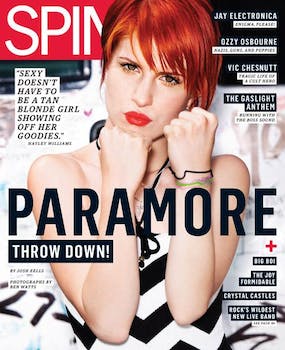 There’s a story in how Spin senior editor Christopher R. Weingarten earned his Twitter handle, @1000TimesYes: Over the course of a year, he reviewed 1,000 albums in tweet format. Now he’s making the 140-character review a permanent part of the publication’s approach to evaluating new music with the Twitter account @SpinReviews.

Starting today, Spin is taking a “bite-sized approach to covering virtually every album that matters in 2012,” as the new Twitter handle’s bio states. Weingarten, with some help from his colleagues, will knock out an estimated 1,500 reviews this year—each in 140 characters or less.

@SpinReviews already has more than 1,800 followers and five reviews to its name, like this summation by Weingarten of rapper T.I.’s new mixtape, F*ck Da City Up:

(“CW” is the author’s initials, in this case Christopher Weingarten, followed by the album’s overall rating on a scale from 1 to 10.)

Weingarten explained the move as a reaction to the declining stature of the rock critic in our instant-access culture. The priority now is engaging in conversation, not just leading it:

“The standard music review, once presented as an imperious edict, has increasingly frayed into a redundant, gratuitous novelty in an era of fewer and fewer actual music consumers. Tight security on major-label albums (and practically no security on indie-label albums) often means you’re downloading a leaked album the same day as your favorite magazine or website. The value of the average rock critic’s opinion has plummeted now that a working knowledge of Google can get you high-quality audio of practically any record, so you can listen and decide for yourself whether it’s worth a damn… Um, but don’t tell anyone we said that, okay?”

It’s long overdue—and it didn’t need Twitter to happen, though the microblogging service’s length limits may have provided some inspiration.

Rolling Stone’s Dave Marsh and John Swenson proved with The New Rolling Stone Record Guide in 1983 that not just albums, but entire careers, could be intelligently condensed into bite-sized summations—and that the reader would be all the better for it. This is a logical extension of that thinking.

In lieu of the 80-word blurbs that have saturated the print magazine’s back pages these past few years, the publication will focus on “Spin Essentials.” These long-form reviews—roughly 20 a month—on Spin.com will be dedicated to the records that simply demand more than 140 characters. See Steve Kandell’s praise of Guided By Voices’ Let’s Go Eat the Factory for an example.

But this is still no easy task. Twitter’s character limit leaves little room for error. It’s an art of concision and concinnity—or just pure punch line.

“ENTER SHIKARI/A Flash Flood of Colour: If the Streets’ Mike Skinner chugged drugs at a rave and tried to save the world with metal. #KG#6”