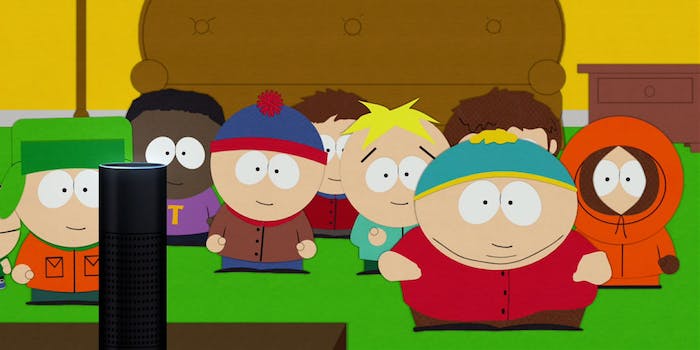 In the episode, Cartman finds a new obsession: Amazon Alexa. And, since it’s Cartman, he proceeds to bombard it with obscene commands. Viewers recorded their in-home Alexas and Google Homes being triggered by the on-screen commands, like adding “titty chips” and “big, hairy balls” to a shopping list.

Alexa ends up tearing the community of South Park apart, but at least people know their home assistants are ON IT.

@SouthPark nailed it tonight. In other news I have an erroneous alarm set for 7am and a set of hairy balls on my shopping list. #alexa

My Alexa put titty chips on my shopping list and said some pretty colorful things. Haven't laughed that hard on a while. #tittychips pic.twitter.com/IumPMXZK0I

This @SouthPark episode has set my @amazon Alexa off about 15 times so far. Had to unplug it