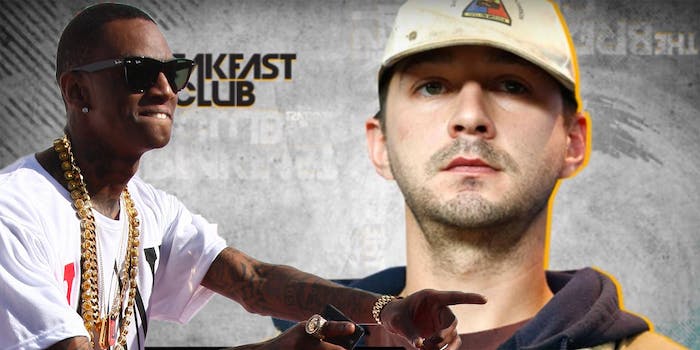 Rapping Shia Labeouf is at it again. After blowing away Sway in the Morning with a successful “Five Fingers of Death” freestyle, Labeouf appeared on yet another storied hip-hop morning show to showcase his skills. And this time he came to beef.

Straight out the gate, Labeouf calls out Hot 97’s Rosenberg while rapping for Power 105.1, its rival station. In fact, the majority of the freestyle takes aim at Hot 97, as well as Rosenberg’s freestyle, and Lil Yachty’s. The Transformers actor even calls out Yachty by his real name: Miles Parks McCollum.

So of course Soulja Boy, who was only referenced as “Soulja” in a verse primarily concerning Yachty, stepped in. It’s worth noting that Soulja Boy and Yachty had beef over who was dating India Love, a model who was just trying to stay above it all. The beef itself is on the rocks as Soulja Boy focuses his attention on that rapping kid from Holes instead.

After spending way too much time pointing out just how much play Labeouf’s freestyle got, Soulja Boy goes on a tear. Here’s the only SFW part of that rant:

You can check out the lyrics to Labeouf’s full freestyle on Genius. The actor has yet to respond to being banned from entering Atlanta, and is instead just tweeting the same weird artsy shit he usually does.

have you ever seen the air so clear?

Lil Yachty has been similarly silent about the freestyle, as has Rosenberg, who was caught up in the festivities of WWE’s Tables, Ladders and Chairs pay-per-view. Labeouf also dissed Drake but honestly, who hasn’t these days?