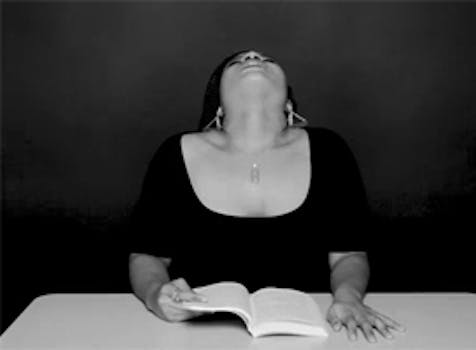 This lit nerd really gets off to Toni Morrison’s “Beloved”

Clayton Cubitt's austere black-and-white exploration of literature and erotica returns with a vengeance.

Two months after creating a divergent—and even more controversial—video for his Hysterical Literature series as a fundraiser for Hurricane Sandy relief, Clayton Cubitt’s austere black-and-white exploration of literature and erotica returned with a vengeance today.

Featuring a heavy green and red filter, the video raised money for Sandy relief, but not everyone was happy with the new aesthetic. Responding to criticism of the change, Cubitt called the critics the “‘Dylan goes electric’ contingent”, referring to the controversy over Bob Dylan swapping his acoustic sound for electric, and threw down a challenge to the series’ many viewers:

“But I’d love to give those who love Hysterical Literature but hate the Sandy session a chance to put their money where their mouth is. So, I’ll make you a deal, if you can yourself donate, and share this link with enough of your friends that we’re able to raise $2500 for support of the project and Sandy relief, I’ll happily release a traditional black and white session of Amanda.”

In December, Cubitt tweeted that so far the tip jar at Vimeo had earned him about $1500, while Google’s adsense campaign had rejected the videos on YouTube, most likely for their age-restricted content. So far he has not released the original black-and-white edition of “Amanda.”

Instead, he’s done one better, reverting to his original look and feel—and heading back to YouTube—for the sixth installment of the series, uploaded earlier today. In it, feminist writer and performing artist Solé reads from Toni Morrison’s Pulitzer Prize-winning novel, Beloved.

Immediately a convergence of difficult themes crowd their way into the video, as Solé reads a passage where the protagonist, Sethe, experiences a stream-of-consciousness memory of slavery, capture, death, and her daughter, Beloved. “I am not separate from her there is no place where I stop,” she reads. “…her face is my own and I want to be there in the place where her face is and to be looking at it too a hot thing.”

Perhaps because the words are so important, Solé struggles to keep reading until the end, which gives this particular reading a tension and a weightiness that previous readings lack. When she finally succumbs to a climax ,it’s a true release and a catharsis for the viewer, as well as for Solé, who collapses in a peal of laughter after the end. “That was the best thing of my life,” she laughs.

Earlier today on her Tumblr, Solé wrote a follow-up post, “My Clit Lit Manifesto,” detailing her end of the experience. “As I float back to earth,” she writes, “I am proud of my revolutionary act of selfishness and revel in its orgasmic goodness.”