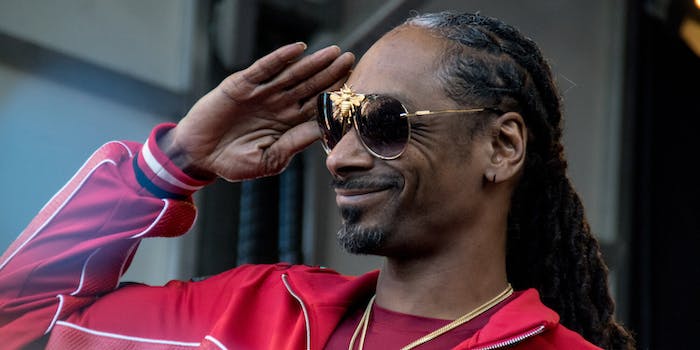 ‘Baby girl kept it 10 toes down and ate that prison sentence by herself, like the true baddie she is.’

Snoop Dogg trolled embattled rapper Tekashi 69, aka 6ix9ine—who is currently cooperating with government authorities as part of his plea deal to reduce his prison sentence—by invoking the name of business mogul and TV personality Martha Stewart.

Stewart served five months in a correctional facility in 2004 for insider trading. On his Instagram, the Doggfather stressed that his Martha & Snoop’s Potluck Dinner Party co-host didn’t snitch.

“As we watch Tekashi 69 (or whatever his name is) snitch on EVERYBODY, I invite you all to remember Martha Stewart snitched on NOT ONE soul during her trial. Baby girl kept it 10 toes down and ate that prison sentence by herself, like the true baddie she is,” Snoop wrote.

Tekashi 69, born Daniel Hernandez, went on trial last week for drug, racketeering, and weapons charges. He testified against members of the Nine Trey Bloods gang, including Anthony “Harv” Ellison and Aljermiah “Nuke” Mack, and even alleged Cardi B was a member of the gang. Dropping dimes on so many people earned the rapper the nickname Tekashi Snitch Nine.

Snoop further ridiculed 6ix9ine, who gained fame as a SoundCloud rapper, with a deleted post in which he assigned the “snitch” label directly.

The “Gin and Juice” rapper is familiar with the legal system himself, having stood trial and been acquitted of a murder charge in the ’90s. Now he’s getting the Tekashi treatment from Troi Torain, infamous host of radio/podcast The Star Report. In a recent YouTube video, Torain surmised that Snoop might be a former snitch himself, sharing paperwork from a 1998 Los Angeles County police report where the rapper, born Calvin Broadus, was attacked by Death Row Records employees. In the report, Snoop also alleged that former Death Row CEO Suge Knight was responsible for Tupac Shakur’s still-unsolved 1996 murder. (Snoop was in the course of leaving Death Row at the time.)

None of this has diminished Snoop’s troll game, more of which can be seen in the compilation of his Instagram stories below.