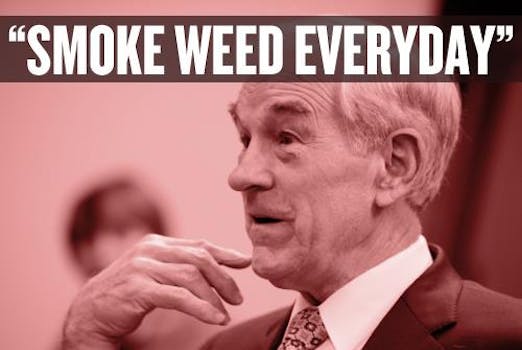 Looks like the rapper knows how to use Google+'s new meme generator.

It seems Snoop Dogg has endorsed a Republican candidate for president.

Last night the rapper posted a picture of candidate Ron Paul, overlaid with perhaps his most famous line, which has become something of an artistic mantra: “Smoke weed every day.”

The line comes from “The Next Episode,” the massive Dr. Dre single from 2001, featuring Snoop and Nate Dogg.

Paul is the Internet’s cult favorite in the Republican primary election, largely because of his Libertarian views. In June, he introduced a doomed bill that would take marijuana off the list of federally controlled substances, instead allowing states to pass individual laws regulating it.

The original photo belongs to Getty Images. It caught Paul in a moment of mirth in December, speaking at a town hall meeting in a public library in Iowa.