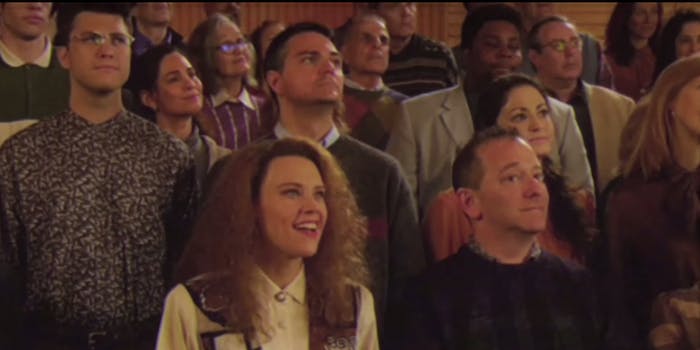 HBO documentary Going Clear made headlines with its disturbing investigation into Scientology, but satire is often the quickest route to the heart of any issue. Saturday Night Live‘s Scientology spoof is a perfect response, parodying a music video commissioned by the Church of Scientology in the early ’90s.

SNL skewers the creepily cheerful atmosphere of the Scientology video shown in Going Clear, advertising “Neurotology” with lyrics like, “Religion and science intertwined/aliens live inside of our minds.” They’ve already got the cheesy ’90s music video aesthetic down, but then things get dark when the video points out what happened to various Neurotology followers after the video was made.

For comparison, here’s the real Scientology video, “We Stand Tall,” featuring several people who later spoke out against the church in Going Clear.

We can’t wait to see what kind of lawsuit the Church of Scientology comes up with to get SNL‘s parody pulled from the Internet.