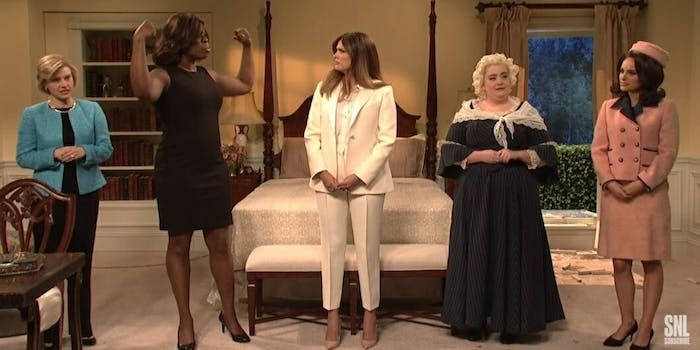 This ‘SNL’ skit will make you feel sorry for Melania Trump

Former first ladies give her their best advice.

Melania Trump is a first lady filled with contradictions.

She’s ripped relentlessly on social media—her Santa selfie and her lack of recognition of her wedding anniversary are two recent examples—but people have sympathy for her plight as a woman married to an allegedly philandering man. She claims she wants to stop bullying, but her husband’s Twitter habits are described as exactly that.

She’s not seen much in public, but people can’t stop talking about her.

And in this Saturday Night Live sketch, she meets former first lady Jackie Kennedy (played by Natalie Portman) and other wives of former presidents. At one point, Kennedy tries to sympathize with her about being the wife of a president who has alleged extramarital affairs, like John F. Kennedy with Marilyn Monroe.

Said Melania, “Oh please, she was in Gentlemen Prefer Blondes. Donald’s girl was in Guys Like It Shaved.

Watch the ghosts of past first ladies visit Trump in her time of need.