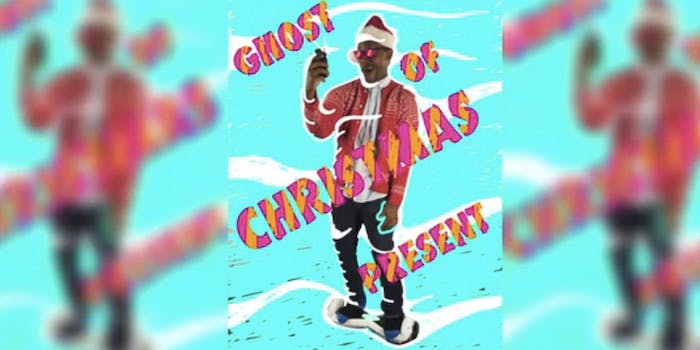 'Merry Vlogmas To All, And To All A Good Snap.'

Sure, the themes of A Christmas Carol are universal, but do they feature a hoverboard?

Thankfully, content studio Astronauts Wanted spent this Christmas retelling the classic tale for the digital age on Snapchat. Dubbed A Vlogmas Carol, it follows the tale of a man too obsessed with YouTube and making money to enjoy the world around him. It stars Vincent Cyr as Scrooge and Thug Notes‘ Greg Edwards as the various Ghosts of Christmas.

Thanks to Snapchat their carol may have been fleeting, but luckily Astronauts Wanted captured the whole experience for their social media channels just in time for Christmas.

This is not Astronauts Wanted’s first time experimenting with storytelling through Snapchat. They run multiple shows and segments on the platform, and they developed SnapperHero, a Snapchat superhero tale that was the most nominated program at the 2015 Streamy Awards.

The carol is told at first from the perspective of a disgruntled intern peeping on her Scrooge of a boss through Snapchat. Eventually the ghosts come to visit them in thoroughly modern ways, including via hoverboard and wearing VR headgear. In the end, Scrooge helps others, and even offers to promote his intern’s YouTube channel—clearly the greatest gift of all.