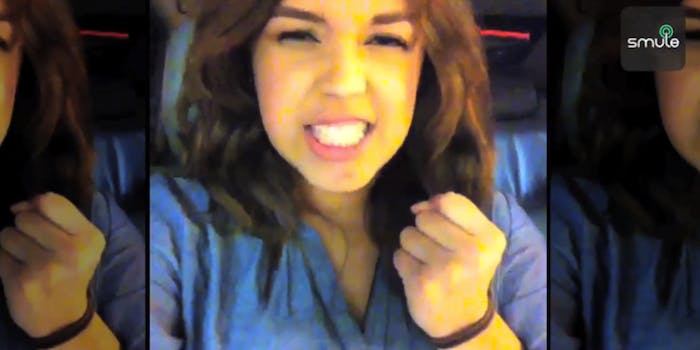 Why wouldn't you want to see a bunch of strangers perform "Cups"?

Vine has become a platform for discovering new bands and songs, but music app developer Smule is now demoing a feature that will turn Vine videos into crowdsourced events.

It announced the new feature, Smuush, last week, and touted it as a “new way of visualizing the world connecting through music in the most authentic way possible—by using Vine to capture the exact moment at which people are experiencing a song and combining all these moments together.”

Essentially, Smuush takes Vine videos with the same music-related hashtag, and extracts audio from each video to find the exact time during the clip where the audio was used. So if 50 people tagged a song with #BohemianRhapsody, all those tagged Vines would be analyzed in order to stitch together the videos so it looks like everyone with that hashtag is performing in one cohesive Vine.

The idea was developed during the homegrown hackathon Smackathon, and the app aims to increase interaction with Vine clips by capturing the real-time moments where people are engaging in performance. As it’s explained on Smule’s blog, “Chances are that no two videos will turn out exactly the same even when given the same, or nearly the same input.”

The app is still in development, but you can tweet suggestions for songs you’d like to see Smuushed together.