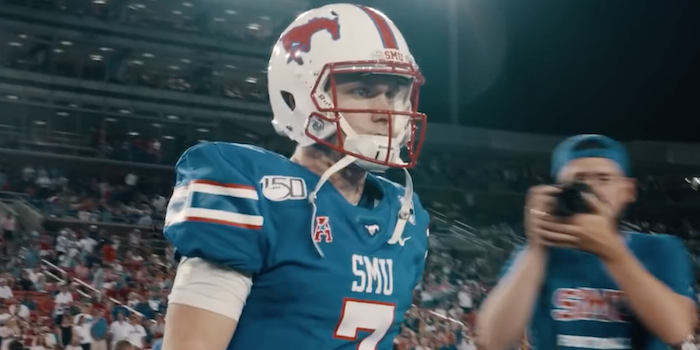 How to watch SMU vs. Memphis

No. 15 SMU, a program on a mission, look to find the inside track on the American Athletic Conference title, taking on the No. 24 Memphis Tigers on Saturday evening.

The Mustangs (8-0, 4-0 AAC) struggled defensively in their hard-fought 34-31 win over the Houston Cougars last week, allowing 31 points and a whopping 510 yards of offense. QB Shane Buechele, the Texas transfer, had a decent game throwing for 203 yards, two touchdowns, and one pick. RB Xavier Jones ran for 133 yards and two scores to pace SMU. One of the defense’s bright spots all year long, senior safety Patrick Nelson, tallied 7 tackles (3.5 for a loss), 2.5 sacks and a forced fumble.

Memphis is looking for more than just a conference win: They’d love to upset SMU and reroute its storybook path. SMU, once considered the worst program in America after the NCAA-imposed “death penalty” in 1986, has had a rebirth. Buechele, an area native, has emerged as SMU’s savior, recharging his own career after an up-and-down time at Texas.

The health of SMU’s star receiver Reggie Roberson Jr. remains a mystery and could figure heavily in SMU’s passing attack.

How to stream SMU vs. Memphis live: Watch AAC football

SMU vs. Memphis: What to watch for

It’s amazing that both these teams nearly lost to 2-6 Tulsa at some point this season. That said, SMU’s undefeated season (and the threat Memphis provides to that) is the big story. There’s no way around the fact that this is a dangerous matchup for head coach Sonny Dykes and the Mustangs. SMU must hold Gainwell below his average to make sure the Tigers aren’t eating clock and limiting Buechele’s ability to operate.

Holding the chalk line, SMU is a 6-point favorite, according to Odds Shark.