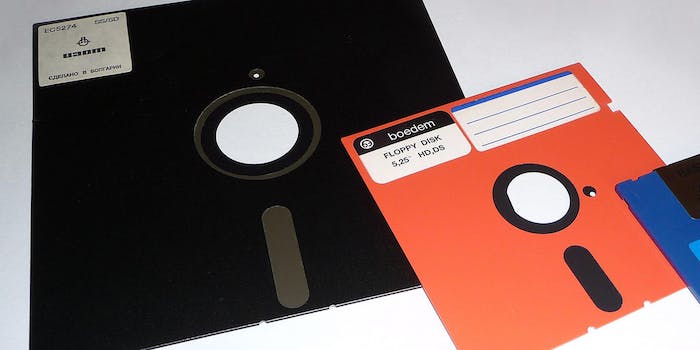 Robots are coming for your jobs, '90s cover bands.

There you are now, would you like to be entertained? Well, then watch this video of the Nirvana classic “Smells Like Teen Spirit” played on a bunch of floppy disks.

If grunge was viewed as a back-to-reality corrective for the excesses of late ’80s hair metal, this cover of the song by an artist called Arganalth could be read as a metaphor for a return to lo-fi simplicity in the sprawling, oft-overproduced expanse of electronic music. Or it just has a relatively straightforward chord progression and an instantly recognizable melody that translates well to simple electronic noisemakers.

The early ’90s anthem, rendered in a style that sounds like propellerheaded art brut electroclash, is far from the first song Arganalth has done in this manner. The artist’s YouTube channel has 40 similar videos for tracks like Dick Dale’s iconic instrumental surf-rock anthem “Misirlou”:

And the theme from Nintendo’s Legend of Zelda series:

In a video linked to on Arganalth’s YouTube page, another YouTuber gives a step-by-step breakdown of how anyone with some time on their hands, a fair bit of engineering skill, and a musical inclination can build their own systems for making floppy disk music based off the Arduino computing platform.

People have been making music for floppy disk drives for just about as long as floppy disk drives have been more or less obsolete, according to Know Your Meme. As far back as 2007, people were using Commodore 64 floppy drives to compose tunes. Like pretty much everything built by nerds, it was immediately put to use making Star Wars tributes. A video of a floppy drive playing the “Imperial March” appeared on the site the next year. The Doctor Who theme eventually followed because of course it did.