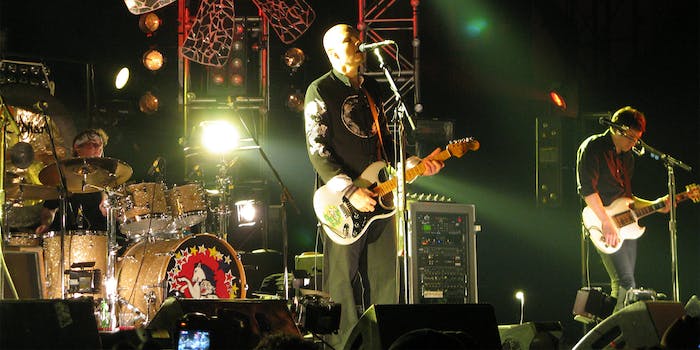 Wanna go for a ride?

The clock counted down to zero Thursday at noon ET, when the Smashing Pumpkins announced a national reunion tour on Instagram. But what was billed as an egos-aside voyage from a beloved but estranged rock band comes with the dirty laundry that reminds us why they split in the first place.

Despite initial reports, this tour will not include the original lineup. Bassist D’arcy Wretzky, who was fired from the band in 1999, won’t be involved, and she says it’s frontman Billy Cogan’s fault. Corgan this week issued a statement blaming Wretzky for making it a three-fourths reunion (original members Jimmy Chamberlin and James Iha are on board). But Wretzky published text messages, shared via music blog Alternative Nation, between the two that contradict Corgan’s story that she “has repeatedly been invited out to play with the group, participate in demo sessions, or at the very least, meet face-to-face, and in each and every instance she always deferred.”

In one of the texts, Wretzky makes her position clear: “i still want to be involved as much as i possibly can.” But she’s facing shoulder surgery, she says, and Corgan doubts her ability to commit to a full-on tour, responding: “We understand your enthusiasm. But we also have to balance the forces at play. I know you don’t agree, nor do you have to… There is no room for error. We blow, this meaning me James Jimmy Jeff’s band is toast.”

Wretzky elaborated on her split with Corgan via a series of now-private Facebook posts, as reported by Stereogum. Late Wednesday, she told Alternative Nation that she “forced him to fire me… They hired [bassist] Jack Bates for this tour. I made Billy spell it out because he was doing his nonsense double talk crap bullshit. Everyone was telling me: ‘Well that doesn’t sound like he doesn’t want you on the tour.’ Nobody could see it, so I finally made him spell it out for me.” She also opened up about her struggles with drug use.

The new tour will hit 34 U.S. cities. On social media, the band hinted at a new album in the works with super-producer Rick Rubin. The “Shiny and Oh So Bright Tour” was announced with a YouTube clip featuring all-grown-up Siamese Dream cover models Ali Laenger and LySandra Roberts.

Fans can look forward to the hits, warts and all.