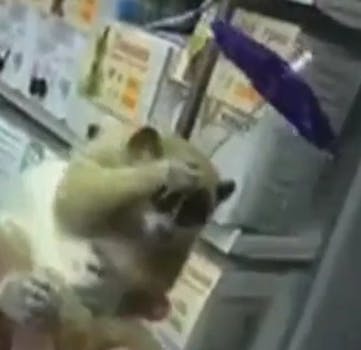 Who speaks for the slow loris?

The slow loris is an endangered species. Does watching them get tickled make their plight worse?

Are YouTube videos of slow lorises being tickled fueling the illegal capture and sale of the endangered species?

According to the recent BBC documentary Jungle Gremlins of Java, which aired on Jan. 25, and subsequent articles in the likes of Scientific American, the answer is yes.

But for YouTube, which has long played host to user-posted videos showcasing the adorable animals, the answer’s not as clear.

A video titled “Tickling slow loris” first became popular in 2009. The Independent, a British newspaper, contended that the video is “fuelling a trade built on cruelty and abuse.”

Selling or buying an endangered species is illegal. But commenters in the media and on the Web contend that slow lorises are also abused in the trafficking process.

In order to sell the slow loris, which is the only venomous primate, poachers clip off the animal’s front teeth and elbow patches with usually nothing more than “pliers, nail clippers or wire cutters.” Many animals die in the process.

This is why Nekaris has been requesting that YouTube remove all loris videos. International Animal Rescue Indonesia, responding to the documentary, has started a petition requesting YouTube remove the videos on the grounds of animal abuse.

“Despite requests to take these videos down, YouTube refuses to see the animal suffering in the slow loris clips,” reads part of the petition.

YouTube’s community guidelines state that users cannot upload videos showing animal abuse, so it should be a clear-cut case, given YouTube’s quick takedowns of other footage featuring animal cruelty.

The slow loris videos are tricky, though. The animals are not visibly abused in the videos, unless you count dressing up an animal in clothing or tickling it as abuse.  The videos do not depict slow lorises’ teeth or elbow patches being cut off.

That nuance hasn’t stopped folks who have viewed the documentary from attempting to take matters in their own hands.

YouTubers, in an attempt to educate potential slow-loris buyers, have taken to flooding the videos with links to the BBC documentary and recitations of its claims.

“People who are saying this animal is not being mistreated are missing the point,” wrote rugby543211 in a top comment on one slow-loris video.

“The pet trade that this animal was bought from is leading the species to extinction…. This video makes people want a loris, it is therefore encouraging the extinction of this magnificent animal.”

Some folks couldn’t be bothered by any of that though, rejecting the notion that their watching of the video contributed to the lorises’ plight.

“Jeez, we get it, you’re fanatic/passionate/a nutjob. Now leave us be to enjoy the ‘d’awwww,’” replied DJKahuna, in response to comments left on another video of a slow loris.