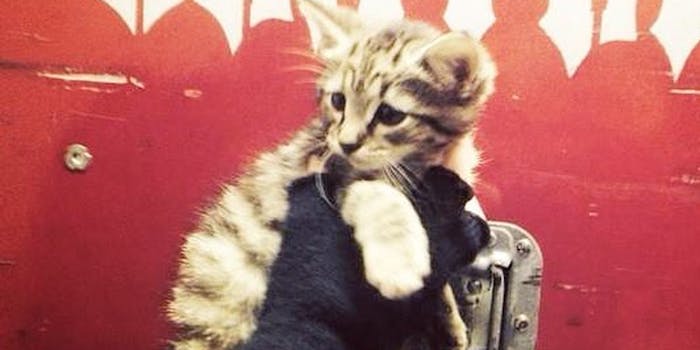 And not for an animal sacrifice, either.

Being a badass rocker doesn’t just mean packing stadiums and shredding eardrums—there’s also the part where you look out for animals who could use a dose of human kindness. Which is why the crew for death metal band Slayer saved a kitten from freezing solid.

“Slayer guitarist Kerry King was finishing dinner at his favourite steakhouse with the band’s road crew before a gig at the Old National Centre in Indianapolis,” the Telegraph reported, “when a homeless man offered to sell a kitten to assistant tour manager Jess Cortese for a dollar.” Cortese took the shivering cat to her bunk on the tour bus and kept it close by the following day until a crew runner’s friend who was looking adopt a pet took her home. 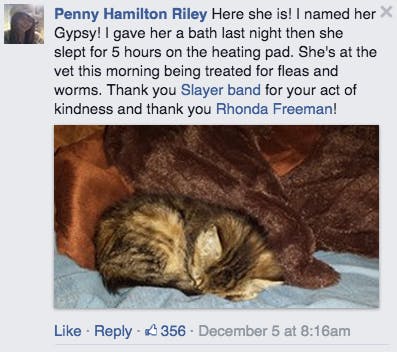 Would have been nice if the homeless guy got a helping hand as well, but don’t let that spoil the feel-good incongruity of this rescue, ably captured in a winning T-shirt design: 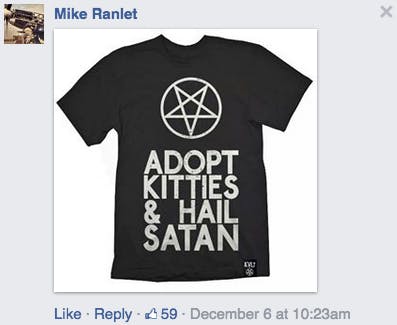 We’d be evicted from the Internet if we didn’t conclude this post with the other Slayer Cat, so here you go: