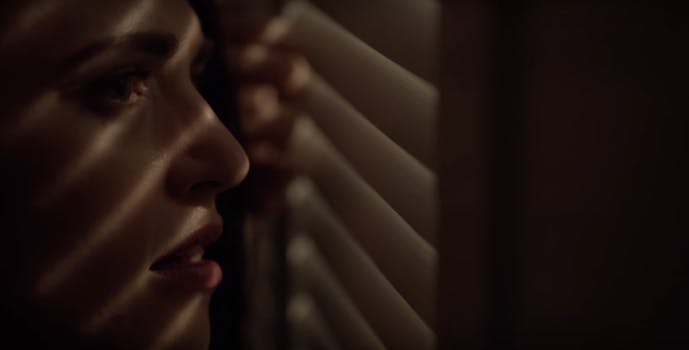 'Slasher' is a paint-by-numbers job that stabs every cliché in the book.

I recently watched I Know What You Did Last Summer in a theater. It’s dopey but I still have a soft spot for the genre, and similarly went into Netflix’s horror anthology Slasher: Guilty Party hoping for a nostalgic blast of slice-and-dice fun.

Alas, Slasher is a paint-by-numbers job that stabs every cliché in the book. The first season of the show, which aired on Chiller, revolved around a copycat killer. Netflix swooped in and picked up the show for this second season. This time out the action focuses on a group of friends returning to the summer camp where they used to work. The group shares a dark secret, obviously, and those chickens are coming home to roost. But the group isn’t alone. The old camp has been sold to some pseudo-hippies, and the two factions are almost immediately at odds.

As the bodies pile up the show becomes increasingly dull. The blame for that is almost entirely on the story. Five years ago Talvinder (Melinda Shankar) was snuffed out by her camp counselor brethren in a revenge prank gone horribly wrong. Peter (Lovell Adams-Gay), Dawn (Paula Brancati), Susan (Kaitlyn Leeb), and Andi (Rebecca Liddiard) struggled with their decisions regarding Talvinder then. In the present they’re still making bad choices.

The “buried secret coming back to haunt you” premise is reliably sturdy, if you can make the formula work in your favor. Slasher clearly knows the formula and hits all of the beats you expect.

But there’s so little imagination on display that you’ll swear you’ve seen this story before. You have. The main problem with Slasher is that it offers nothing new and has nothing to hang its bloody chainsaw on. Roger Ebert had a term for these kinds of stories: Dead Teenager Movies. Ebert’s definition is “any movie primarily concerned with killing teenagers, without regard for logic, plot, performance, humor, etc.” Slasher is a prime example of this. The characters are slightly older than teens, but they were teens when they put the story in motion. The logic of the story is goofy, and made goofier by the serious tone. There isn’t any humor or levity, so the self-serious nature of the story becomes the joke after awhile. The actors do their best to salvage the material, but it’s a lost cause.

The characters are all thin and weakly conceived, and the more we learn about them the less sympathetic they become. When all of the characters are terrible people, rooting for their demise can offer some relief. But the masked killer here may as well be a blank slate. That puts the show in the unenviable place of having bad characters matched with a boring killer. It’s like the audience is being served a plate of frozen fish sticks with a side of mayo.

Fittingly, the only time the show displays spark is when it’s time to off characters. Despite the creativity of some kills, the show wallows in its violence. Slasher doesn’t shy away from its nastiness, which some fans of the genre will see as a plus. But it only serves to highlight the shows shortcomings. Why can’t the same care be given to the characters?  It’s torture for the characters and torturous for the audience.

On top of having an uninteresting story, there is an equally unappealing whodunit mystery going on. To the show’s credit, the identity of the killer is masked well (pun intended). To the show’s discredit, by the time the killer is revealed it lands with a thud because you likely have long checked out.

Slasher is a show that will only appeal to fans of the genre. If you aren’t inclined to like this kind of thing, Slasher is not going to convert you. If you’re looking for some Halloween viewing, you’re much better off going to a theater to see Happy Death Day. That’s a good example of how to make a formula work in your favor.

Revisiting I Know What You Did Last Summer reminded me that I’ve mostly outgrown the genre. I’ll always love Scream and get a kick out of the knockoffs that followed. The things that scared and amused me 20 years ago have by and large grown stale. Slasher: Guilty Party put another nail in the coffin.