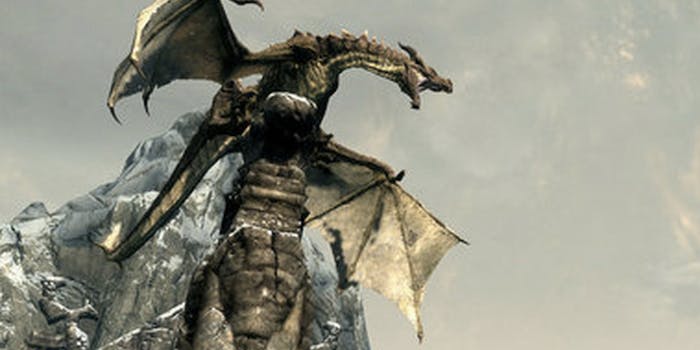 Dragon slayers reign supreme on Reddit with the release of Skyrim.

Skyrim, the dragon-centric sequel of the Elder Scrolls series, comes out today. With a score of 96 on Metacritic, it‘s the most highly rated video game available.

Perhaps even more valuable than critical acclaim, Reddit’s lent its collective seal of approval. Posts about Skyrim are dominating r/gaming and the front page.

At press time, the second post on the front page was dedicated to redditors commiserating about being too poor to afford Skyrim.

“I know that feeling, money is tight since I got a new PC to replace my old one so I have to wait for Skyrim and the like,” wrote Tracazoid.

In order to get their hands on the game as soon as possible, many gamers waited in line this morning at local retailers. At the top of r/gaming was a redditor’s photo from one store where the person first in line ended up purchasing—gasp— a game other than Skyrim.

“it looks like he got both games and put skyrim in his front sweatshirt pocket. still funny though,” wrote I_create_sounds.

Another redditor shared a blog post about Skyrim that prompted heroics: A 13-year-old reportedly got his copy of Skyrim stolen out of his hands outside the game store, and a blogger put together a collection from people in line to buy him a second copy. Still, Reddit commenters are doubting the story.

“Isn’t Skyrim rated M? As in, a 13 year old couldn’t buy it without their parents?” one redditor wrote.

Also on r/gaming, a husband and wife, both redditors, posted a photo of themselves playing Skyrim at their computers side by side with the caption: “Marriage, I think we’re doing it right.”

Even redditors who aren’t familiar with Skyrim are talking about Skyrim. Rather, they’ve put together a thread about not knowing what the fuss is about.

Aside from all this user content, Skyrim’s developers are also advertising on the front page.

The deluge of posts prompted one redditor to ask, “Why does Skyrim need to advertise on Reddit? Half the posts from the front page are about the game anyways.”

Another responded: “Because the other half aren’t about it yet.”

However, nothing lasts long on this fast-paced sharing site. Already a redditor has posted about the next big video game of the season, Legend of Zelda: Skyward Sword.

“And as the Skyrim posts fall in number the Skyward sword posts shall ascend,” a redditor named shamins quipped.