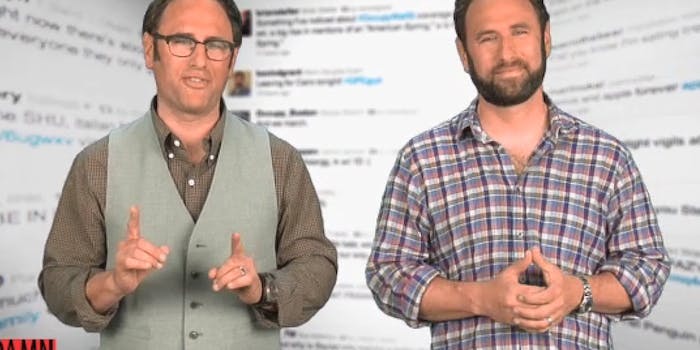 Comedians The Sklar Brothers deliver all the news that's fit to tweet in their new weekly pop-news variety show, "The Tweekly News," for My Damn Channel.

The Sklar Brothers: They’re here. They’re sponsored. Get used to it.

The affable comedic duo debuted their new pop-news variety show “The Tweekly News” Friday—and it’s on YouTube. Hosted by online laugh hub My Damn Channel, the five-minute sprint rounds up all the week’s news that’s fit to tweet and spits it back with enough snark to keep the trolls at bay.

“I’m talking about important news,” Jason, the one with the glasses and patchy tan, explained. “Like the 411 on the death of Mr. Trololo.”

The brothers riffed through a myriad of tweets during their short time on set, chatting about football player Donald Driver’s ill-fated shoe giveaway, Gwyneth Paltrow’s petty “N***as in Paris” gaffe, and the fact that President Obama is now providing transportation for entertainers via aircraft.

“Forget the Wisconsin recall,” brother Randy said. “This week, Twitter was fired up about Bon Jovi hitching a ride on Air Force One.”

“The Tweekly News”: about nothing if not the important stuff.

Naturally, the boys have set up a Twitter account—@thetweeklynews—to flood with quips, excessive retweets, and musings about next week’s show. (“The Tweekly News” airs every Friday.) Viewers can actually make their way onto the show by tweeting “something really freaking funny” at that handle.

“Twitter calls it a retweet, we call it a free writing staff,” Jason said.

Photo via The Tweekly News