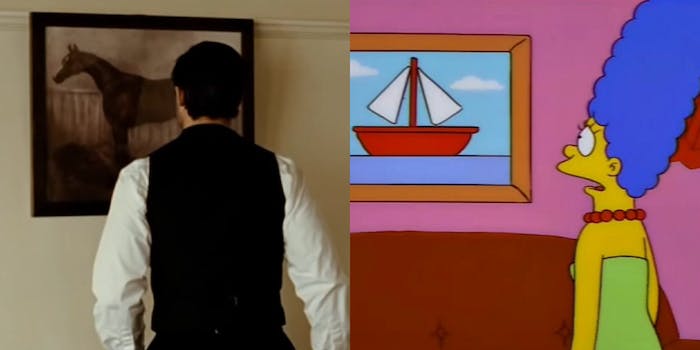 Did ‘The Simpsons’ predict every movie and TV show ever?

There seems to be no end to things 'The Simpsons' has predicted.

When you have a show that’s run nearly 30 seasons, especially one that’s as imaginative as The Simpsons, you’re going to end up “predicting” a few things about the future. Everything from Lady Gaga’s Super Bowl appearance to a Donald Trump presidency appeared as gags on the show before becoming a reality. Even a spooky three-eyed fish appeared in Brooklyn, New York, 25 years after Bart hooked one near the Springfield nuclear power plant.

Now there’s an entire Twitter account devoted to movies and TV shows predicted by The Simpsons. Sure it might be stretching things a bit—or, well, a lot—but that doesn’t mean it isn’t fun to look at.

Get Out (2017)
(dir. Jordan Peele) pic.twitter.com/owwIsumEQd

Of course let’s not forget that things can work in the opposite direction. Like the time Quentin Tarantino predicted Jersey Shore.