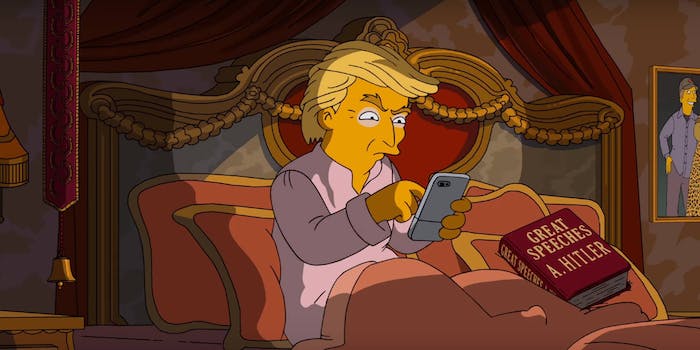 Photo via Animation on FOX/YouTube

‘The Simpsons’ gets political in new clip featuring Donald Trump

Donald Trump is pictured with a copy of Hitler's speeches in his bed.

The Simpsons is no stranger to political satire, so it was only a matter of time before the show aired a straightforward parody of this year’s presidential candidates.

In a new clip posted by showrunner Al Jean, Marge and Homer Simpson decide whether to vote for Donald Trump or Hillary Clinton—helped along by a TV ad comparing each candidate’s leadership style.

By the way, if you think that Trump’s bedside copy of Hitler’s speeches is a little too harsh, think again. According to his ex-wife Ivana, he did indeed keep a copy of My New Order, a collection of Hitler’s early speeches, in a cabinet beside his bed

Honestly, we’re surprised it took The Simpsons this long to make a Donald Trump hair joke.