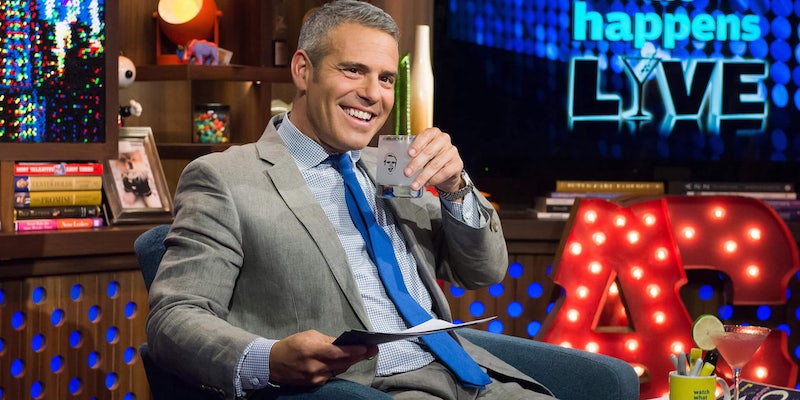 How to stream ‘Watch What Happens Live’

Sure, late-night talk shows are typically on after the young’ns are counting sheep, but even the more provocative hosts offer shows that are a bit too Mikey Mouse for most. All except Andy Cohen.

Watch What Happens Live is far-flung from any network TV talk show. Andy Cohen interviews celebrities across all media, including actors from TV and film, athletes, and even reality shows stars. Instead of guests offering rote promotion for movies no one will ever see, Andy Cohen gets real, and usually pretty raunchy. He isn’t afraid to ask the tough questions, like “What is Shaq’s penis size?” In turn, guests get to ask him their quandaries, including “Are you and Anderson Cooper sleeping together?” It’s as guilty as guilty pleasure TV gets.

Here’s everything you need to know to stream Watch What Happens Live.

What is Watch What Happens Live?

The show takes its name from Bravo’s official slogan “Watch What Happens.” Since its inception in 2009, the show has been hosted by Andy Cohen. In July of 2019, the show celebrated its 10th anniversary with guests Chrissy Teigen, John Mayer, and Luann de Lesseps.

Where to stream Watch What Happens Live

The following live TV streaming services include the Bravo channel allowing you to watch Watch What Happens Live. There are variations among them, though, especially when it comes to the local channels offered.

Watch What Happens Live on Hulu with Live TV

Hulu Live TV sets you up with local channels and has a broad spectrum of entertainment and sports channels to review, including the full suite of ESPN channels, Cartoon Network, FX, HGTV, and even deep cuts like National Geographic and Syfy, and of course, Bravo, where you can stream hits like Watch What Happens Live.

Watch What Happens Live on FuboTV

To stream Watch What Happens Live, you’ll want to dock in at the FuboTV Standard level.

If you want to stream Watch What Happens Live, know that you can stream it on YouTube TV.