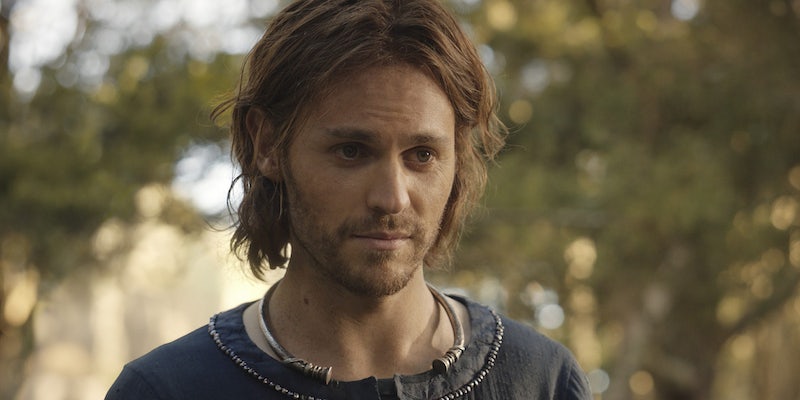 ‘The Rings of Power’ ends season 1 as it began: With wildly uneven pacing

The show manages to feel glacially slow, even while rushing through momentous events.

This review includes spoilers up to The Rings of Power episode 8, “Alloyed.”

The Rings of Power finale was certainly attention-grabbing, hinging on the revelation that Halbrand is Sauron. But while this was a major twist, it suffered from the same pacing issues that plague the rest of the show.

As a side-character in Galadriel’s story, Halbrand goes from shipwrecked nobody to King of the Southlands in five episodes, helping to forge the three elvish rings in the finale—just in time for Galadriel to figure out that he’s Sauron. On a logistical level, this reveal is a little dicey. When Bronwyn’s villagers declared him king in episode 6, wouldn’t someone have mentioned that he’s the first one in centuries? And why does everyone just believe he’s the right guy? Either way, his arc leaves little room for the Sauron reveal to have an emotional impact.

Tolkien fans always knew that Sauron could be hiding in plain sight. With a story like this, the writers had two options: Make it clear from the start that Halbrand is an undercover villain (like Hannibal in NBC’s Hannibal), or set him up as a good guy so his betrayal comes as a surprise (like the secret cylons in Battlestar Galactica). Aside from a few hints that Tolkienites noticed in earlier episodes, the show went for the latter option.

There’s nothing wrong with this strategy, but in order to give the twist some weight, you need to build up the villain’s relationships. For Halbrand, that primarily means Galadriel, whose goal is to find and kill Sauron—a very juicy conflict. Yet the show barely explores her burgeoning friendship with Sauron-in-disguise. In episodes two to four, they’re reluctant allies. In episode 5, she persuades him to join the Numenorean voyage to Middle-earth and “reclaim his kingdom.” In episode 6, they fight the orcs and he’s welcomed as king by the locals. Then he gets injured, and the final two episodes consist of Galadriel taking him to some elvish healers, where he meets Celebrimbor and plants the idea for the Rings of Power.

This arc is so rapid and action-packed that Halbrand and Galadriel don’t have a chance to develop a rapport—unlike Durin and Elrond, whose screentime focuses on their friendship. The rushed pacing also saps the drama from Halbrand betraying Celebrimbor, because they only know each other for a few days. (This is more of a slow-burn relationship in Tolkien lore, with Sauron befriending and advising Celebrimbor while pretending to be an elf named Annatar.)

The Rings of Power manages to feel extremely slow while (on paper!) a lot of stuff is technically happening. There’s no better example than the Numenorean journey to Middle-earth. Upending centuries of isolationism, this is a momentous decision for Queen-regent Miriel. Yet compared to the complex power struggles in Game of Thrones, this subplot is little more than a cursory outline, struggling to articulate the deeper conflicts between Miriel, Ar-Pharazôn, and Numenor’s historic relationship with the elves. And when they do go to Middle-earth, they only stay for two and a half episodes! Their entire trip consists of them coincidentally appearing at the same village as Bronwyn and Arondir, where they defeat some orcs and get caught in a volcanic eruption. Then they go home.

Based on what we see onscreen, this epic military quest consists of a brief skirmish and a natural disaster, bookended by two short and uneventful sea voyages. It doesn’t feel “big.” However, we’re meant to interpret it as a massive geopolitical shift. As is often the case, the show rushes past momentous events while luxuriating in scenes where nothing really happens—i.e. montages of characters handing Important Props to each other or gazing at the scenery in silence.

The “scenes where nothing happens” issue invites unflattering comparisons with Peter Jackson’s Lord of the Rings, which this show routinely tries to copy. The LOTR movies often slow down to focus on casual moments between the lead characters, or simply to explore Middle-earth. Crucially, every one of these plot-free scenes is rich with emotional and thematic meaning. For instance, a lot of thought went into the architectural journey from the pre-industrial setting of the Shire, “back in time” through ancient ruins and Anglo-Saxon settlements (Rohan), finishing in the primordial landscape of Mordor. By contrast, the equivalent “slow” sequences in Rings of Power rarely convey any particular meaning. This counts both for visual/production design choices, and for the absence of character development outside of big, plotty moments.

Take Bronwyn and Arondir as an example. We have less insight into their relationship after eight episodes than we did for Merry and Pippin in The Fellowship of the Ring, because the show doesn’t give them any naturalistic scenes together. And despite all the epic shots of expensively-realized props and locations, the visual worldbuilding is surprisingly shallow. The show’s aesthetic choices mainly function as a reminder that Amazon has a lot of money to burn, without considering how to use that money wisely.