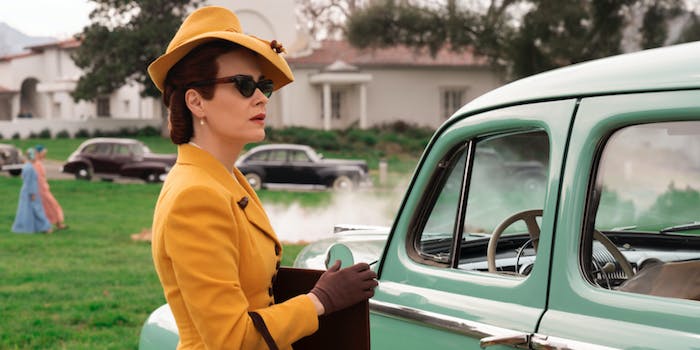 ‘Ratched’ is an origin story that tells us nothing

'Ratched' is a true Ryan Murphy production. That's not a good thing.

Ratched, an eight-episode imagining of the origins of One Flew Over the Cuckoo’s Nest villain Nurse Ratched, is a series that doesn’t need to exist. But it does, and instead of an original riff, it feels like another volume in the American Horror Story franchise.

RELEASE DATE: Sept. 18, 2020
CREATOR: Evan Romansky
STREAMING: Netflix
Lots to look at, not much to think about.

Written and created by newcomer Evan Romansky and co-executive produced by Ryan Murphy, Ratched is set in the beautiful Northern California seaside town of Lucia, 1947, instead of the Oregon setting of the 1975 film (and Ken Kesey’s 1962 novel). We see from the first episode that Mildred Ratched, played by Murphy regular Sarah Paulson, is manipulative, calculating, composed. This helps her infiltrate the Lucia State Hospital and gain employment; we eventually discover why she’s there, but not before Mildred is involved in some astounding breaches of conduct.

She zeroes in on the facility’s head doctor, Richard Hanover (Jon Jon Briones), a narcissistic drug addict who’s more concerned with acclaim than compassion. In one scene, he performs a primitive ice-pick lobotomy on a woman, in an effort to cure her of lesbianism. While filled with murder and gore, the first half of Ratched also focuses on the horrific consequences of homosexuality being viewed as a mental disorder. After saving one patient from a barbaric hydrotherapy session, an orderly tells Mildred, “You’re an angel of mercy,” echoing the name that would be given to multiple nurses who’ve been convicted of killing patients.

Though the writing is pretty hokey at times, Paulson is in complete command of her character. Despite her sociopathy, there’s some flicker of humanity in Mildred, which is supposed to keep us interested. The show explores her own repressed sexuality, assisted by Gwendolyn Briggs (Cynthia Nixon), who works for the governor (Vincent D’Onofrio) and finds herself drawn to Mildred. In one early meeting, the two eat oysters in a seaside restaurant and swim in all the metaphors, a scene that will likely become a meme. Their relationship is the most interesting thing in the series, but it’s underdeveloped in favor of other plot points. Are we to equate Mildred’s queerness with her diabolical behavior, a trope as outdated as the production code that helped create it? More troubling is Charlotte (Sophie Okonedo), a patient with what was then known as multiple personality disorder. Dr. Hanover initially tries to help her, but she is instead used for spectacle, her trauma exploited, as she’s rendered a cartoonish villain for no real reason.

As with any Murphy property, Ratched does too much, including a completely unnecessary subplot involving Dr. Hanover and Sharon Stone’s over-the-top heiress Lenore Osgood. Murphy revised the early history of the entertainment industry with Hollywood, and Ratched feels like it was filmed on the same sets: The hospital looks more like a lushly designed hotel. Everyone is impeccably dressed: There are so many women’s hats you could make a drinking game out of it. This is the most glamorous mental institution that’s ever existed.

That makes Ratched even more of a fantasy. It’s a visual feast, but there’s no real analysis of its characters, or the mental health system of the time. While Louise Fletcher’s Nurse Ratched was certainly controlling and abusive, she also represented the bureaucratic consequences of absolute power, and what men feared in women. Ratched beats any nuance or insight to a pulp.