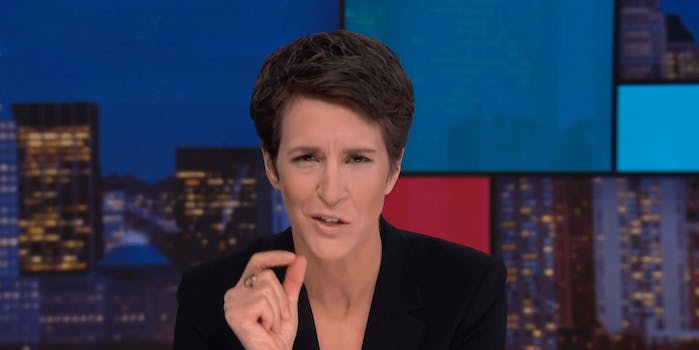 How to watch ‘Rachel Maddow’ online for free

Everything you need to know to watch the most-viewed cable news host online.

How to Stream MSNBC

Rachel Maddow has become one of the news media’s biggest names, drawing an average audience of 3.43 million viewers at the end of 2018. Maddow’s long-form format, where she speaks at length about one or two topics, is a breath of fresh air in the horse race that is cable coverage of the Trump administration. If you’re looking to ditch your cable company and keep your news programming, here’s how to watch Rachel Maddow online for free.

How to watch Rachel Maddow for free

With the exception of Philo, MSNBC—and thus a Rachel Maddow live stream—is available on most major streaming services, and each comes with at least a free seven-day trial. Here’s everything you need to know about each one before signing up.

Hulu with Live TV is exactly what it sounds like: Hulu’s on-demand library with a live stream of 58 channels. You’ll get Rachel Maddow on MSNBC, plus CNN, Fox News, NBC, and even CNN International. Hulu is also kind to sports fans, with four ESPN channels on offer. If you love having the on-demand stuff to fall back on when you’re bored of live television, then Hulu is a great choice. The news can be a downer, so check out these great comedies on Hulu. (Here’s the complete guide to Hulu Live TV channels.)

Sling TV is split up between the Orange and Blue packages, but you can combine them for $45 a month. If you want MSNBC, and thus a Rachel Maddow live stream, you’ll need to pay an extra $5 per month for the “Sling Blue: News Extra” package, which is full of news channels. The add-on gets you CNBC and MSNBC, plus international channels like BBC World News and France 24. Besides news, Sling Blue gets you AMC, Comedy Central, History Channel, National Geographic, and more. (Here’s the complete guide to Sling TV channels.)

FuboTV is a great bargain, especially if you’re into domestic and international sports. For $54.99 per month, you get 85 channels including MSNBC, plus CNBC, CNN, Fox News, NBC, and more. Sports options include the Big Ten Network, FS 1 and FS2, NBA TV, and even the NFL Network. Fubo TV is also friendly to Spanish-speaking audiences with a package dedicated to such channels and a ton of international soccer offerings. (Here’s the complete guide to FuboTV channels.)

At 73 channels for $49.99 a month, YouTube TV is a solid choice. You get six accounts per household, so you won’t be stepping on each other’s toes when everyone wants to watch something different, and you’ll get your MSNBC and Rachel Maddow live stream. If you want to keep up with news from across the pond, YouTube TV also gets you BBC World News. (Here’s the complete guide to YouTube TV channels.)

Pluto TV is the absolute cheapest way to watch a Rachel Maddow live stream because, well, it doesn’t cost anything at all. You’ll find an MSNBC live stream under the “NBC News” channel, plus other recognizable channels like Fox News, CBSN, and even Geek & Sundry. Aside from a few well-known options, Pluto is more about themed channels that run specific genres of shows and movies. “Horror 24/7” is appropriately spooky, and “Flicks of Fury” will satisfy any kung-fu lover. The image above is only half of the channels available.

MSNBC allows you to watch a live stream of the channel if you can provide proof you subscribe to an applicable streaming service. Simply go to MSNBC.com, click “Watch” in the top left, and you’ll be prompted to enter your login information. Any of the services above should suffice. Then you should be able to watch a full Rachel Maddow live stream—or any other MSNBC show. You can also access shows the day after they air.

You can follow the same instructions above to watch an MSNBC and Rachel Maddow live stream on the app, though it’s only available on iOS devices.