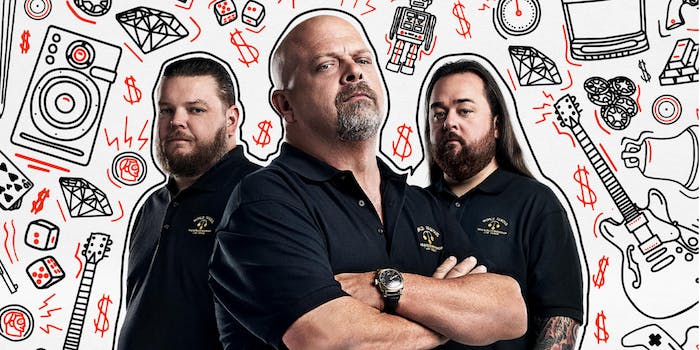 How to stream ‘Pawn Stars’

The Harrison boys of the Gold and Silver Pawn Shop are Las Vegas mainstays, and they’re not simply cable stars, but Pawn Stars.

Since 2009, fans looking to score big money visit the Vegas strip not to pull the lever on a slot machine, but to haggle at Rick Harrison’s pawn shop. The Harrisons will consider any fair offer on everything from guns to Russian antiques, and even moon rocks.

It’s not just a cash grab. Every item gets inspected by one of Rick’s expert friends, who lay down some serious knowledge that History channel is known for. The concept of a reality show set in a pawn shop seems odd, but it’s addictive enough to be one of the most-watched shows on cable.

Here’s everything you need to know to stream Pawn Stars.

What is Pawn Stars?

When it first premiered in 2009, Pawn Stars was a standard 30-minute program. In 2019, the show expanded to be an hour long.

How to stream Pawn Stars

History is available on a few of the major live TV streaming services. When trying to decide which one is best for you, you’ll want to weigh the cost, the other channels you’ll receive, and the compatible devices for streaming.

Hulu Live TV sets you up with local channels and has a broad spectrum of entertainment and sports channels to review, including the full suite of ESPN channels, Cartoon Network, FX, HGTV, and even deep cuts like National Geographic and Syfy, and of course, History Channel, where you can stream Pawn Stars and Vikings.

How to stream Pawn Stars episodes

Select seasons of Pawn Stars are available on Hulu.

If you want to watch episodes of your favorite shows on the day after they air, there’s no better option than Hulu. The streaming service, which just slashed the cost of its ad-supported version to a mere $5.99 per month (or $59.99 a year), offers episodes of shows including Seinfeld, Family Guy, Golden Girls, and many other hits on-demand. There’s also tons of celebrated original programming including Letterkenny, Veronica Mars, The Handmaid’s Tale, and PEn15, and of course, Pawn Stars. If you subscribe to Hulu Live TV, you’ll get the on-demand portion of Hulu included for free. You can also upgrade to Hulu with No Commercials for $11.99 per month.