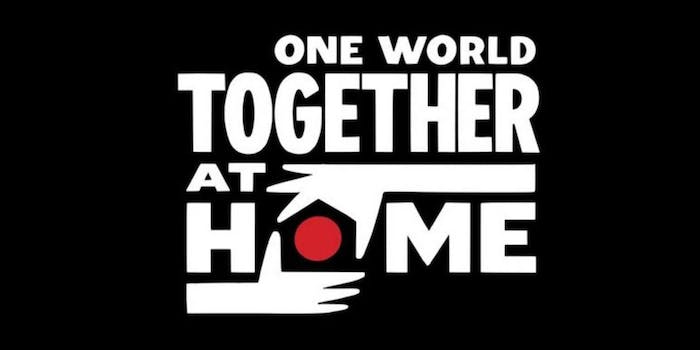 How to stream ‘One World: Together At Home’

We are the world, we are the home bound.

Live-Aid brought the world a little closer together in the ’80s. This latest benefit brings folks together for a common cause during the global pandemic—while following social distancing rules of course.

One World: Together at Home is a one-day event to help raise funds and celebrate workers on the frontline battling the disease. The show, brought to you by the World Health Organization, will feature live musical performances from the biggest names in music, including Andrea Bocelli, Celine Dion, John Legend, Lady Antebellum, Stevie Wonder, Jack Johnson, and many, many more. There will also be presentations by global health experts.

Here’s everything you need to stream One World: Together at Home.

One World: Together At Home hosts

The event will be hosted by the trio of late-night greats: Stephen Colbert, Jimmy Kimmel, and Jimmy Fallon.

When does One World: Together At Home air?

The global event will air on Saturday, April 18 from 8-12pm ET on ABC, NBC, CBS, Amazon Prime, and a host of other channels and streaming services listed below. The pre-show will begin at 2pm ET. It will also be broadcast via Twitter, Facebook, Twitch, and YouTube.

How to stream One World: Together At Home

The channels above including NBC, ABC, and CBS are available on a handful of the major live TV streaming services. When trying to decide which one is best for you, you’ll want to weigh the cost, the other channels you’ll receive, and the compatible devices for streaming.