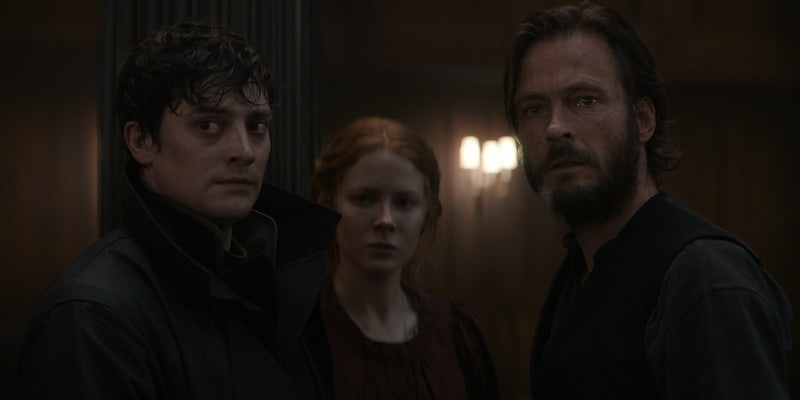 Set on a Victorian steamship, this show is full of creepy mysteries - but struggles to tell a believable story.

Set on a 19th-century steamship traveling from Europe to New York, 1899 takes pains to be as mysterious as possible. An ominous triangular symbol appears on jewelry and clothing and secret trapdoors. Several characters dream of living other lives. Iridescent beetles lead people to important locations; one of many details that feels very similar to a puzzle-solving videogame. And most obviously, this ship is following the same route as an identical vessel that went missing four months ago.

As someone who enjoys genre fiction about unpleasant things happening at sea, this kind of material holds immediate appeal. Unfortunately, the show’s creators—the team behind the hit sci-fi series Dark—are too focused on making things weird and enigmatic, and not concerned enough with creating believable drama. Protagonist Maura Franklin (Emily Beecham), a neurologist and passenger on the ship, spends an inordinate amount of time asking questions like “What’s happening!?” in increasingly distressed tones. A relatable vibe, but not as interesting as the kind of mystery where people meaningfully investigate what’s going on.

Shot in gloomy shades of gray with purposefully anachronistic music choices (20th-century rock on a Victorian steamship), 1899 falls into a familiar niche for Netflix prestige sci-fi, dropping hints about parallel dimensions and experiments into human consciousness. See also: Stranger Things, Sense8, The OA, and Dark. When you know that Netflix executives give storytelling notes based on viewership data, you begin to get suspicious of shows that borrow too much from previous hits, or feature an overabundance of cliffhangers to keep people clicking through to the next episode.

Contrasting with the more common problem of Netflix shows being too slow-moving, 1899 would actually benefit from lingering a little more. The ensemble cast offers an extensive international cross-section of passengers and crew: A community of Danish migrants, the captain (Andreas Pietschmann) and his officers, a young Chinese woman traveling incognito with her mother, a newly-married couple, a stowaway, and so forth. All of them carry intriguing secrets of their own, overshadowed too quickly by the various supernatural happenings on the ship.

Relationships and conflicts accelerate at an implausibly fast pace, including a massive blow-up that arrives almost out of nowhere. And even taking into account the clues that this isn’t a normal Victorian setting, the class and gender divides don’t really ring true. A lot of these character arcs feel suspiciously like placeholders while we wait to find out what’s “really” going on.

Your enjoyment here will depend on your patience for Mystery Box storytelling. Each episode introduces an enticing array of spooky and inexplicable perils, which was enough to hold my interest for a while. But the human elements are clearly less of a priority than the central question of What’s Going On. For instance, it would be helpful to know more about Maura’s personality alongside her portentous dreams and dark backstory—both of which are, of course, mysteries. Cool production design and unusual worldbuilding can go a long way, but it’s hard to get fully invested when you don’t really care about the characters.